The Science Behind How You Really Make a Decision

In July 2015, Mark had the opportunity to be part of a private permit 16 person, 16 day river trip on the Colorado River through the Grand Canyon. Prior to leaving, Maggie Millard challenged him, almost tongue in cheek, to return with stories about Lean. Little did either know or expect the lessons on kaizen, leadership, and continuous improvement that would emerge. 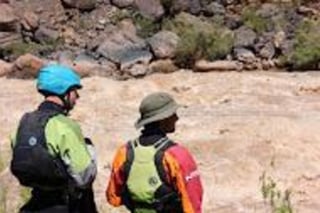 There I stood gazing down at Lava Falls, the biggest, hardest rapid in the Grand Canyon. I had clamored over the rocks to have a look, and it was scary. One huge hydraulic 'hole' after another,  large enough to swallow a raft, not to mention my little kayak. At this water level, there did not appear to be any safe route through. I was afraid. But the path to walk the rafts and boats around this was not easy either; it had its own risks. I was the trip leader, and they were looking to me.

So we stood there and gasped, but the longer we stood there, the more a potential path showed itself. I spoke with the others; walked down to river level to get another view; people began to point things out, and as we discussed the different angles each added something I had not recognized before. We identified a route: the entrance, the move one had to make, and the moves one could try if thrown off course.  Now rather than a scary maelstrom of doom, Lava looked very doable. But could I make those moves? How did I feel in my boat today? What if I totally botched the run? After awhile, I felt good about the possibilities, enough so to give it a go. Never mind what really happened!

Plato believed that we needed our rational brain to control the desires and emotions that were trying to hijack our choices. He depicted this as a charioteer, the rational brain,  constantly trying to rein in the unruly and wild twin horses of desire and emotion. If we can just get past our lizard brain, we could get it right. We could be who we want to be, and others would get it too. That's what Plato believed, and so have we ever since.

How, then, do you reconcile that with the case of EVR? He had surgery to remove a large frontal tumor in his brain. In the process, surgeons had to also remove the pathways that connected his midbrain, the so-called lizard brain and the seat of desire and emotions, with the frontal cortex, the seat of reason. EVR was quite intelligent and remained so; he just could not make a decision. For instance, going out to eat was a taxing chore- where to go, where to sit, what to order, what to eat first. We take such decisions for granted. But for EVR, this was agonizing. He could not make a choice.

Calling those parts of the 'lizard brain' primitive is really misleading. That actually refers to evolution rather than function. It turns out, we need both areas to make the best decision. Our rational brain is not wired to consider one's values, preferences, and beliefs, the very things that enable one to choose between valuable but conflicting options, but the Hidden Brain, those functions outside of one's awareness, is. If the problem is straightforward with a clear direction, the prefrontal cortex is well equipped to do the focused analysis and sort through the options required to make a 'good' choice. But if it is a real dilemma, one without such a clear direction, it's the Hidden Brain voice that you really need. Rather than one riding hard over the other, you need both factoring their voices together to arrive at a ‘best’ decision and choice. EVR, I fear, would still be standing at Lava Falls.

The brain is more like a scale - comparing moment by moment and issue by issue what it discovers against what it believes it knows, balancing the Hidden Brain voice and the prefrontal cortex analysis to judge what to do. However, it turns out that despite our best intentions, there is much we do to ourselves and others that get in the way of such a coordinated process that uses both in the best fashion possible. We act more like Plato's charioteer.

Stay tuned. In subsequent posts, we'll get into what's really going on. You will likely never think the same about your decisions...or theirs. And we will see that when it comes to empathy, we have it backward. Subscribe to this blog to make sure you don't miss out!