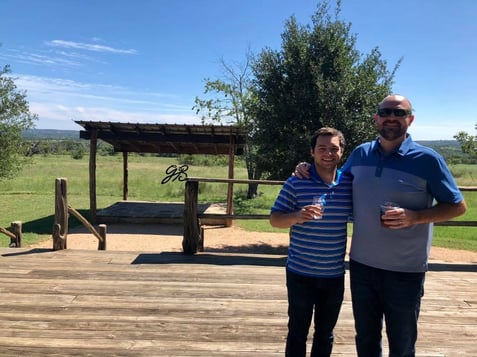 One of the greatest benefits of working at KaiNexus is our commitment to learning and growth. I was thrilled when Kade Janssen and I were given the opportunity to attend the first Symposium on Learning Organizations: Agile, Lean, Deming, and More hosted by Mark Graban, Dion Stewart, and Joel Tosi.

The Symposium started off with a visit to Toyota Motor Manufacturing Texas (TMMTX) in San Antonio, Texas. Although this was Kade’s and my second trip to the Toyota manufacturing plant, there was still lots to learn.

First was the visitor’s center. It had been completely redesigned from our previous trip. Aside from still having the ever-present Andon-cord, Toyota added a number of hands-on activities, including a car door spray paint video game, an example of the automated motorized cart tugs, and a demonstration of their weight-assisted chair movers.

The hands-on experiences were great to see some of the process involved at the plant first hand. The chair simulation demonstrated how simple improvements (and a little physics) can take lots of strain away from frontline staff members attaching parts, such as car seats.

Seeing the tour of the plant a second time, even though the tour was extremely similar, was helpful as well. The first tour was so overwhelming with so many things going on it was difficult to take it all in. The second time I was able to pay attention to more than what the tour guides pointed out. During the tour, the guides direct attendees attention to shop floor areas or processes.  Mark suggested before the tour that I look in the opposite direction to make sure I was looking at completely new processes and areas of the plant.

My eye kept wandering to the KPI Corrals and the Improvement Centers where employees get to experiment and build their improvement ideas. Being a part of the improvement world keeps my interests more specialized than the general public; I know that the tours are designed for the general public, but I left wanting to know more about how improvements are tracked and how employees got to test their ideas.

We took a tour of the Distillery and learned a little about their processes. Garrison Brothers would not claim that they practice continuous improvement, but they work to improve every batch of bourbon they produce each year. Dan proudly stood before our group and said that every year, each batch was better than the last as they learn how the Texas heat and location of where the barrels are stored affects the bourbon. They do their own version of PDCA with each batch, and even smaller experimental batches. It was great to see improvement being applied to each part of the distilling process.

Our last day of the symposium consisted of Open Space discussions. An Open Space discussion consists of groups of topics picked by the attendees of the symposium. Anything improvement related, from adoption and participation to technology and tools, were fair game. Multiple groups met at the same time and individuals were welcome, if not encouraged, to leave and join other discussions that interested them at any time.

I had never participated in an Open Space discussion but found the resulting chats fascinating. Our symposium had a variety of people from different industries, including healthcare, finance, professional services, manufacturing, technology, and consultants. Everyone attending had different experiences, problems, and solutions to bring to the table.

The discussions themselves were amplified by the venue. The discussions took place at the Garrison Brothers barrel barn, with a beautiful view of the Texas Hill Country out the back and plenty of fresh air to keep the discussions lively.

We closed with Mark’s red bead experiment, showing that emphasis on improvement, baselines, and even rewarding employees doesn’t work if the processes are poor (for the record, I *did* have the least amount of defects in my batches!).

I know that everyone attending learned something new - and made new friends to bounce improvement ideas off of in the process. A big thanks to Mark, Dion, Joel and the Garrison Brothers for hosting and putting on a great conference. Keep an eye out for the next Symposium that Mark, Dion and Joel host! I know I want to be there for it!