FedEx and UPS Didn't Ruin Christmas, Thanks to Continuous Improvement 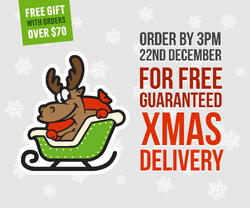 Companies that believe in a continuous improvement approach to business implement opportunities for improvement and recognize incremental gains throughout the year. There’s also a time and a place for a more radical overhaul of a process. This is true in hospitals, manufacturers, logistics companies, and retailers.

But, every holiday season, shipping and logistics companies are faced with a major, "this-is-not-a-drill" test. They must take the lessons learned from the prior year and implement positive changes in a situation that cannot be easily practiced in real conditions. They only get one chance to make each holiday season a success. That’s why we find the success of the improvements made by FedEx and UPS this holiday season so inspiring.

Last year was a bit of a disaster for FedEx and UPS, as they faced a confluence of circumstances that resulted in late delivery of packages that had been promised in time for Christmas. Shipments in the last week before Christmas were up 37% over the prior year and the weather was terrible. Retailers did not adjust shipping guarantees based on the stressed network or weather delays, so as many as 10% of gift givers and recipients expecting packages during the days before Christmas were left with a hole under the tree. The largest carriers took the brunt of the blame. Who wants to be the company that ruined Christmas?

Signs Pointed to Worse Problems in 2014

If you make your revenue delivering packages, the massive shift to online shopping has to be a good thing, right? Yes, but… Shoppers are increasingly holding off on purchases until closer to the big day and retailers, fighting to gain market share against both competitors and brick-and-mortar stores, frequently offer free, or very low cost, expedited shipping right up until the last possible minute.  Early on, both FedEx and UPS recognized that they needed to make some significant changes in order to avoid similar, or worse problems in 2014.

Cross functional collaboration and improvement is hard, but the challenges faced by these shippers required even more than that. Solving the capacity problem and ensuring on time delivery, meant collaborating with major retailers, such as Amazon, Walmart, and Nordstrom, as well.  In order to smooth the flow of packages, the carriers needed to know what promotions retailers would be running and when. They needed to have volume estimates, and in some cases, caps on the number of packages coming from retailers.

We offer kudos to FedEx, UPS and the retailers they work with for recognizing that shifts in customer behavior required a new approach to capacity planning, forecasting and expectation setting. Making these changes probably required more than incremental improvements driven by frontline staff suggestions. I’m just guessing, but I bet they had a major project and possibly a number of improvement events to plan, make, and test changes that they hoped would get them ready for the 2014 holidays. And they did it! Their dedication to improvement surely resulted in smiling faces in family rooms and PR departments alike.