Nexie Awards, Honoring the Best and Brightest of the KaiNexus Tribe 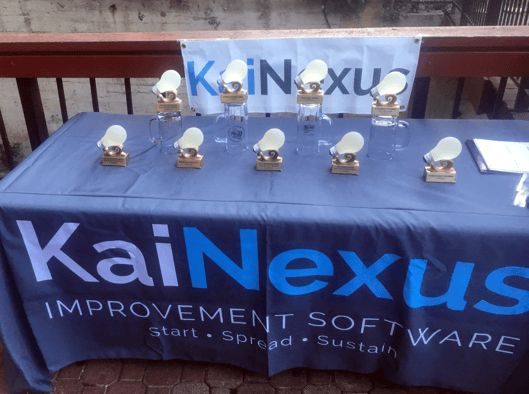 At KaiNexus, we are firm believers that recognition is the best form of motivation. In some cases, individuals may be motivated differently; some intrinsically and others extrinsically. Despite these differences, motivation through recognition can be a simple and universal method for getting people fired up.

Every year at KaiNexus we host an annual User Conference in Austin, Texas, where we invite all of our customers to gather for 3 days of knowledge sharing, networking, and keynote presentations. In the spirit of continuous improvement, every year the conference gets bigger and better, due to a maturing industry and also because we make it a point to listen and incorporate attendee feedback. Practice what you preach, if you will.

This year we decided to incorporate a new form of recognition at the conference. Rarely do we have our customers under the same roof, so we wanted to take advantage of the gathering. KaiNexus customers are at the cutting edge of using technology to build improvement cultures. What does that mean? It means that people who use KaiNexus are innovative leaders, doing some very unique things with technology to bring out the best in people at their organization. This fire amongst our customers is the reason I come to work.

Oftentimes KaiNexus customers are the ones recognizing and rewarding others. We decided to change the game for an evening by hosting an informal awards ceremony to honor customers for their hard work and commitment to excellence throughout the year. The awards, now officially referred to as "Nexies," were meant to be a play on the Oscar or Grammy, and given based on a variety of criteria and categories. Behind the scenes, what started as an OI in our internal KaiNexus called "Customer Awards" was quickly implemented by selecting categories and nominees. After a quick run through the marketing engine, we had our awards!

This year's Nexie Awards were given to organizations based on the following categories:


The inaugural Nexie Awards Ceremony was so much fun! What was intended to be a light-hearted thank you gesture to our outstanding customers turned into the start of a tradition. After the awards were given out, intrigued attendees began to approach award winners and without really trying, we fostered more knowledge sharing; which is what the User Conference is all about. The resulting Nexie chatter suggested that by recognizing great work we can easily motivate others to improve.

Like many other initiatives at KaiNexus, we hope to improve the Nexie Awards over time. There were several OIs that came about after the ceremony, but in general, we think everyone enjoyed receiving awards and learning about their peers. Congratulations to all of our Nexie winners and stay tuned for the 2018 nominees!