Bring the Spirit of Pokémon Go On Your Gemba Walk 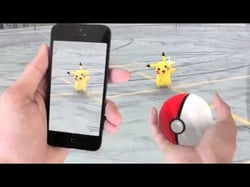 A friend is visiting Rome right now. Yesterday she posted a selfie from the Coliseum. Of course, I asked the obvious question, “Is it a Pokéstop?”  It is 7 Pokéstops and a gym!

You’d have to have been living under a rock for the last few weeks to have missed the Pokémon Go phenomenon. This interactive game has just about everyone doing something downright crazy – going outside.

Of course, thinking about these things like I do, I was struck by the similarities between Pokémon Go and the practice of Gemba Walks. Perhaps your next Gemba Walk will be more effective and fun if you consider what it has in common with the phenomenon that is sweeping the world right now.

Unlike thousands of other online games, you can’t play Pokémon Go from your couch. Similarly, a Gemba Walk requires movement. Gemba, after all, is translated as “the real place.” In business, it is the place where work actually happens. In order to really understand it, you have to be there.

Much of the fun of Pokémon Go comes from the fact that so many people are playing it. Show up at a Pokéstop and you just might make a new friend. Your Gemba Walk should be similarly interactive. Everyone in the organization is taking part in the game of improvement. The people you meet along the way can give you valuable insight into the way work is done and why particular tasks are currently done a certain way.

When you visit a Pokéstop, the goal is to capture Pokémon and other supplies. It isn’t until later that you put them to use. This is true of a Gemba Walk as well. The purpose is to capture and document ideas for improvement. Only after a period of reflection and analysis do you shift into action mode.

Pay Attention to Your Surroundings

The internet is full of stories about people who have had or caused accidents while playing Pokémon Go. The app itself warns you to pay careful attention to your surroundings. You must also do that on a Gemba Walk. It is important to take note of the workspace. Are the appropriate tools and supplies readily at hand?

One of the interesting things about Pokémon Go is that the app actually does a terrible job of explaining how the game works or what to do. New players never really know what to expect next. It is also wise to begin your Gemba Walk without a strong set of expectations. You might have a particular process or team that you want to observe, but let the path lead where it may. Don’t assume that work is being done according to the Standard. Let your observations and conversations reveal the current state.

The Pokémon craze may be just a flash in the pan, but the developers have been smart in rolling out new features slowly over time. This keeps the game fresh and people interested. You want to do the same for your Gemba Walks by mixing them up. You may do it at a different time of the day, day of the week, or part of the month. (You might even try doing one backward.)

What’s great about Pokémon Go is that it has encouraged people to go see something new or to take a fresh look at something familiar. That’s the essence of a Gemba Walk. You’ve got to be there and live the moment to uncover ideas for improvement.

We hope you catch them all.