How to Leverage Lean for Long-Term Success

With a title like How to Leverage Lean for Long-term Success (Under Short-term Pressures), it’s no surprise that our recent webinar was packed with some useful information and actionable advice for viewers. Hosted by our VP of Improvement & Innovation, Mark Graban, the webinar was presented by Warren Stokes, Director of Process Improvement at HonorHealth, a health system in Arizona and KaiNexus customer.

Watch Now (you can watch the recorded webinar immediately after registering):

In this webinar, you'll learn:

The Plot, the Approach, and the Opportunity

Stokes began by outlining the plot that shapes the story of many organizations today across various industries. As he explained, outside pressures - policy, technology, legal considerations, market changes, budget gaps, decreased demand, decreased volume, increased supply costs, etc. - can create a situation where leaders are under pressure internally to respond to the short-term outside pressures rather than focusing on their long-term goals.

“There should be no difference in the short-term versus the long-term in our commitment to Lean; we should be adding to our longer-term strategy,” Stokes said. “There’s a couple of rules, or principles, that we would want to follow in order to be as successful as we can, or as effective as we can in the short-term.”

The first principle is not to focus on a one-fell swoop idea, Stokes explained. Usually, if there was one viable big idea it’s likely that the organization already would have implemented it in the first place anyway - and if they haven't, it's because it's is usually too big of a risk for the organization.

The second principle is to be mindful of organizational disruption when considering improvements and cost reductions. While everything an organization does has some sort of impact, the degree of disruption and how healthy that disruption is for the organization should be considered.

The first step, before we even get into planning, is to align - and to align quickly - Stokes said. This begins with getting a true understanding of the current state of the organization by focusing on the key business drivers that are driving the business or reflecting the business, and by validating the definitions and calculations.

Once an understanding of the true current state of the organization is reached, the organization needs to take the data it is receiving and add context to turn it into useful information. As Stokes explained, data itself is fine, but it’s like a bunch of pieces of a puzzle; if we don’t know what picture the puzzle will reveal, it’s harder to make those decisions.

“One other piece of this would be prioritization. Once we understand what those key business drivers are, once we understand the picture and the context of what this data is showing us, we want to prioritize because we can’t focus on everything, especially in the short-term” Stokes said, offering a variation of a simple failure mode and effects analysis (FMEA) chart to illustrate how to quantify the impact of actions on each key business driver.


Effective Use of Lean Language: Simple and Practical

“Part of leadership’s role is to create the right energy. We want everyone focused, and we want to get everyone in the mindset. There’s already anxiety and it’s already a stress-filled environment [due to the] short-term pressures,” Stokes explained. “A very critical part of what [leaders] do is provide clarity around the situation… using effective language and bringing visibility, or light, to the challenges ahead of us...  not just focusing on one level of the organization, but rather, engaging at all levels.”

When an organization focuses on just one area that’s struggling, there is a risk of stakeholders feeling targeted, Stokes said. If they are viewing it that way and feeling anxiety, they will disengage further and won’t be as motivated, meaning the organization won’t be able to capitalize on all their experience and knowledge. Stokes said that to combat this, leaders should be specific about the challenges the organization faces, and avoid generic phrases like, “Work smarter, not harder.”

Speaking about the effective use of the language of Lean, Stokes cautioned it can be a barrier when the jargon heavy language of Lean experts is used to explain things to those new to Lean.

“If we’re trying to be as effective as possible within our own organization, the language of Lean is the language of the organization - and it’s up to us to bridge that divide. What we don’t want to do is create a new barrier while we’re under these short-term pressures, where now we’re actually trying to teach people a whole other language while trying to also get them to problem solve,” Stokes said.

Executing with Rapid Cycles of Improvement 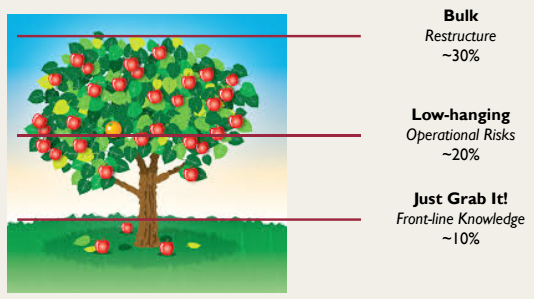 After the problem is understood, the energy is there and a simple, unified improvement language is being spoken, it is time to seize the opportunities for improvement. Stokes described the typical opportunities for being able to respond to short-term pressures by using the analogy of a fruit tree, which can be divided into three levels:


“The fact is that we can’t afford not to be Lean, especially in the short term,” Stokes said - which is a great point to end this summary on, in my opinion. For more information, be sure to watch the webinar in its entirety!