What the KaiNexus Team Saw and Heard Visiting a Toyota Plant

As I wrote about last month, the entire KaiNexus team was excited to have the chance to visit and tour the Toyota truck factory in San Antonio, the plant known as TMMTX (Toyota Motor Manufacturing Texas).

Here is the team inside the visitor center: 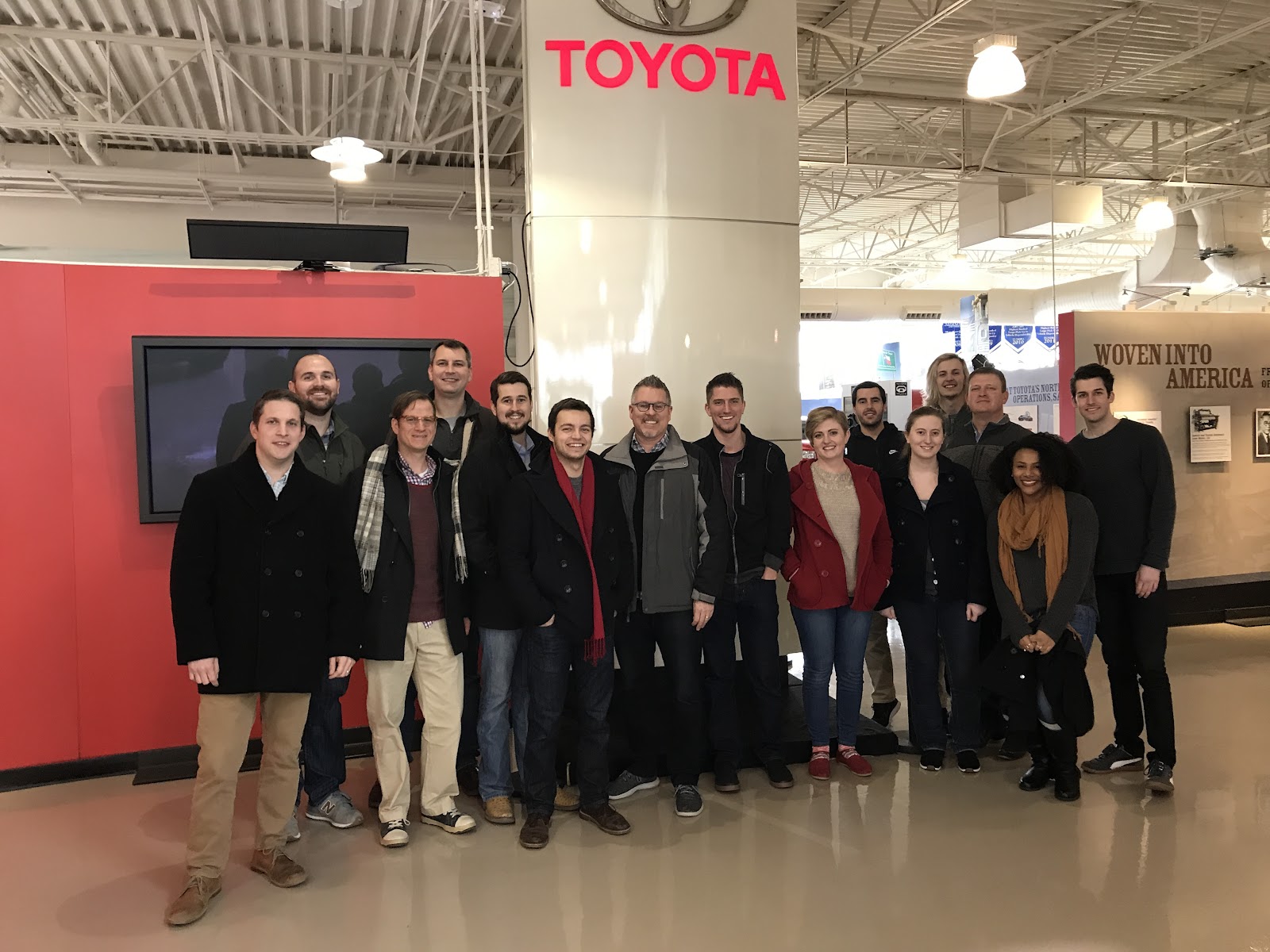 In the visitor center, we checked out the exhibits that cover some of the history of Toyota and key principles of The Toyota Way and the Toyota Production System.

Kaizen, as Toyota explains, is “the relentless pursuit of perfection.” At Toyota, “innovation drives continuous improvement.” We try to live by those ideals at KaiNexus, as do many of our customers. Here’s a shot of some of us in front of the Kaizen definition. Yes, it was cold that week in Texas, as you can tell from our coats. 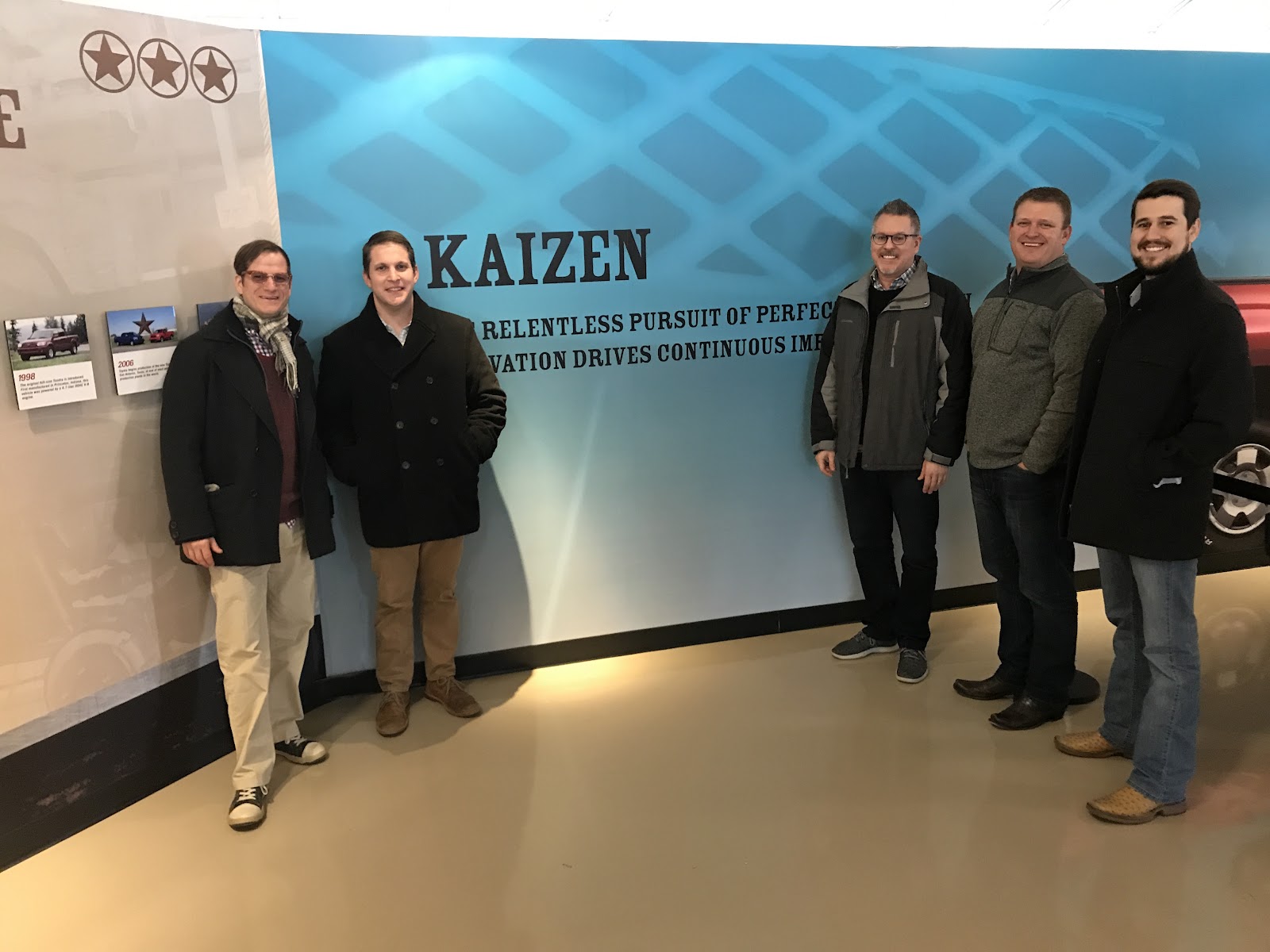 A few of our KaiNexus team members looked forward to seeing the “andon cord” process in the factory. As we were driven through the plant, we could hear the chimes and music playing, indicating that a team member had pulled the andon cord at some point along the assembly line. Some of our KaiNexus colleagues were surprised that the andon tunes were children’s songs (especially London Bridge is Falling Down, which Maggie thought to be a particularly odd choice in a plant with cars rolling up ramps overhead), but the recognizable music helps team leaders and group leaders know where the andon cord was pulled (in addition to the lights that go off).

The andon cord process is part of how Toyota ensures quality is built in and that defects are not passed on down the line: 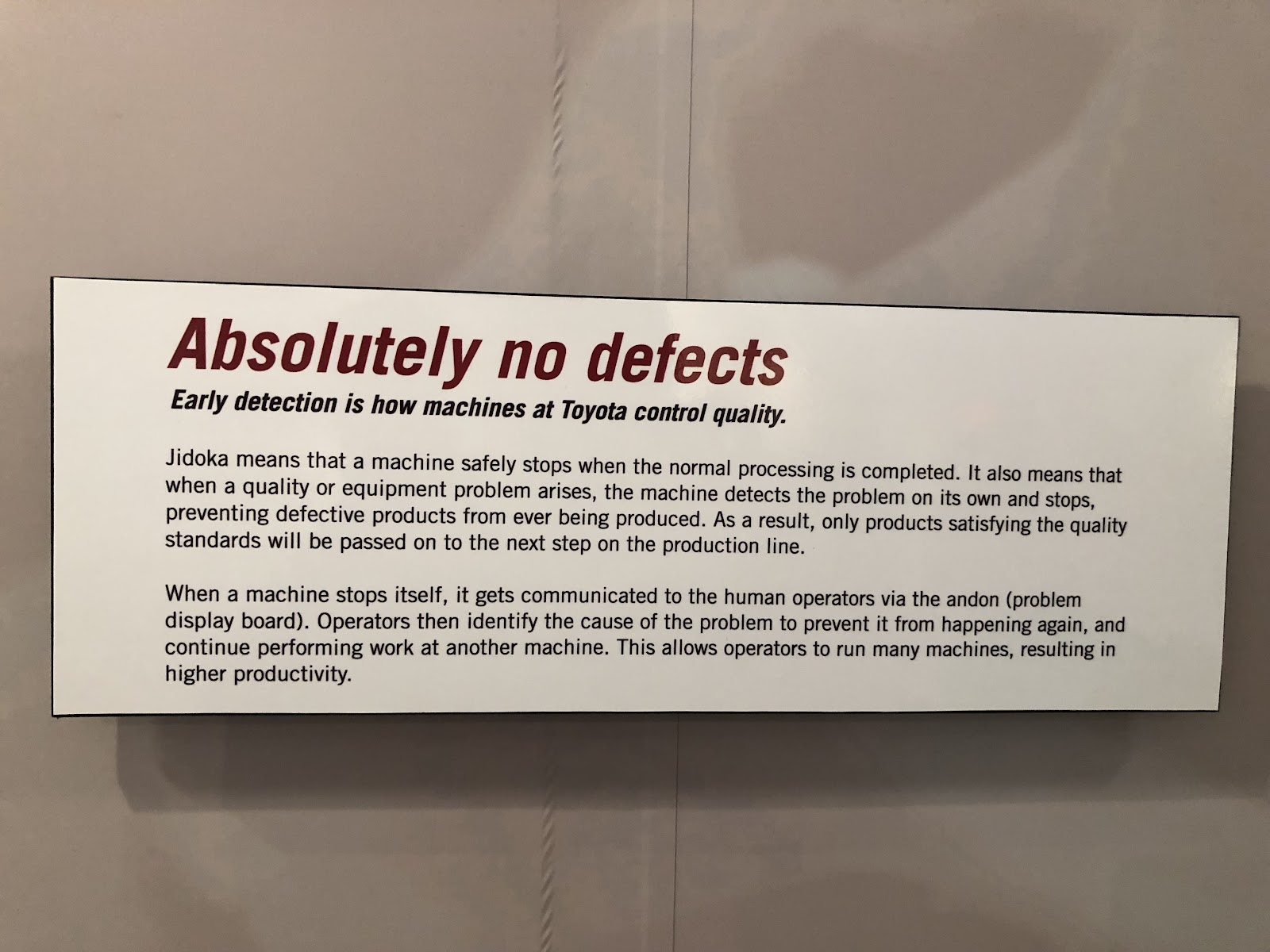 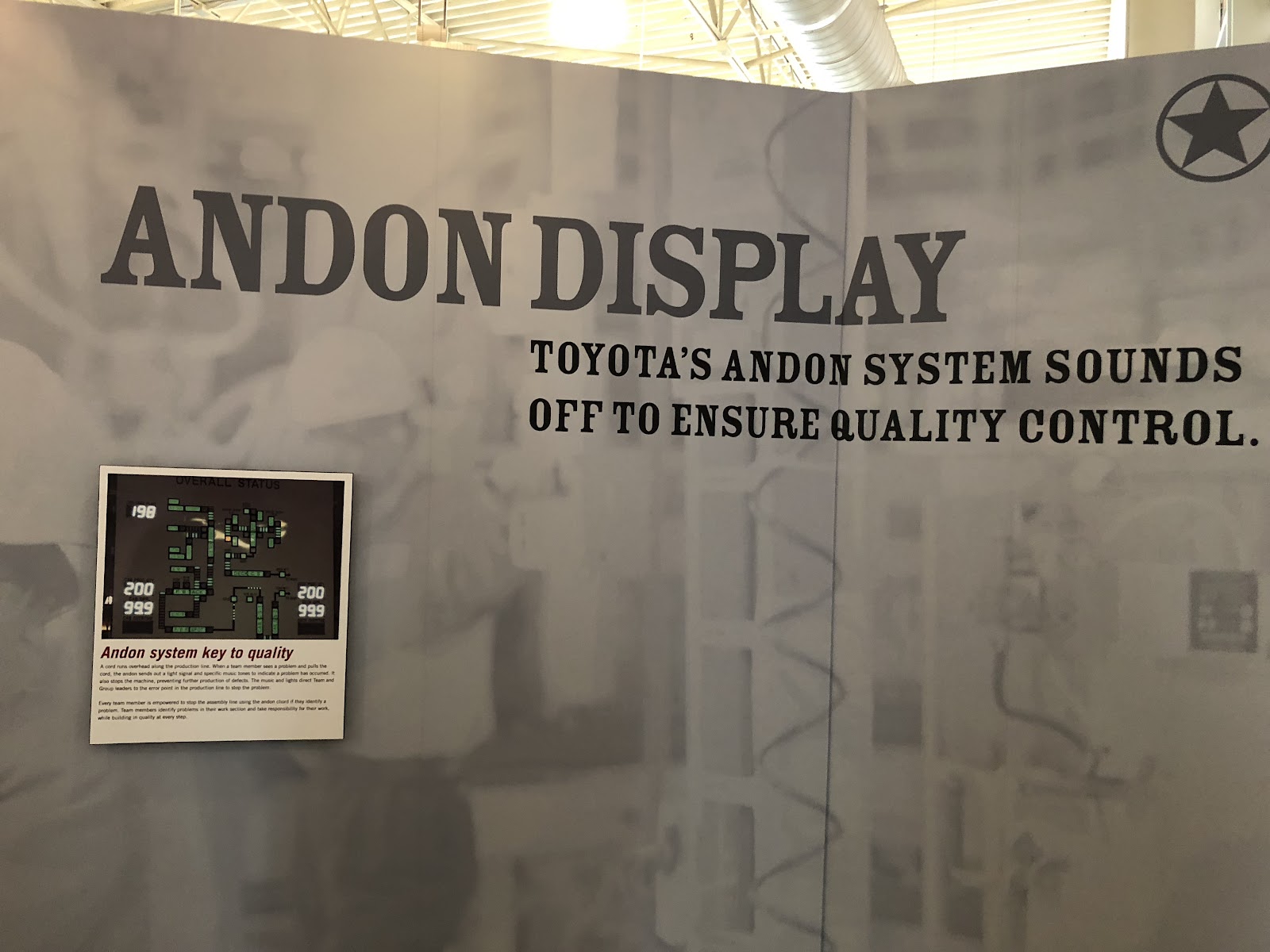 Some of our KaiNexus colleagues took advantage of the opportunity to pull the andon cord in the visitor center, just for fun: 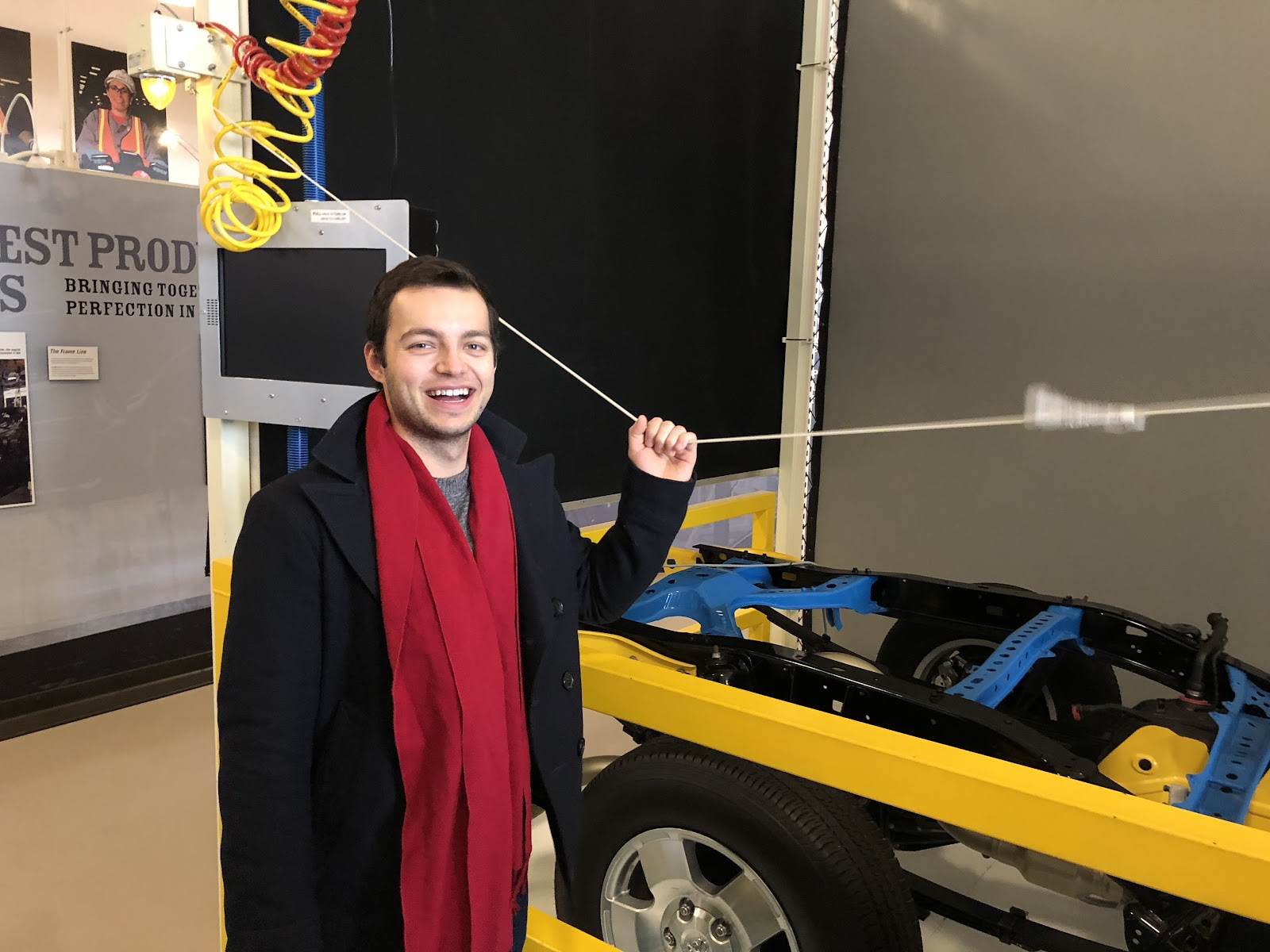 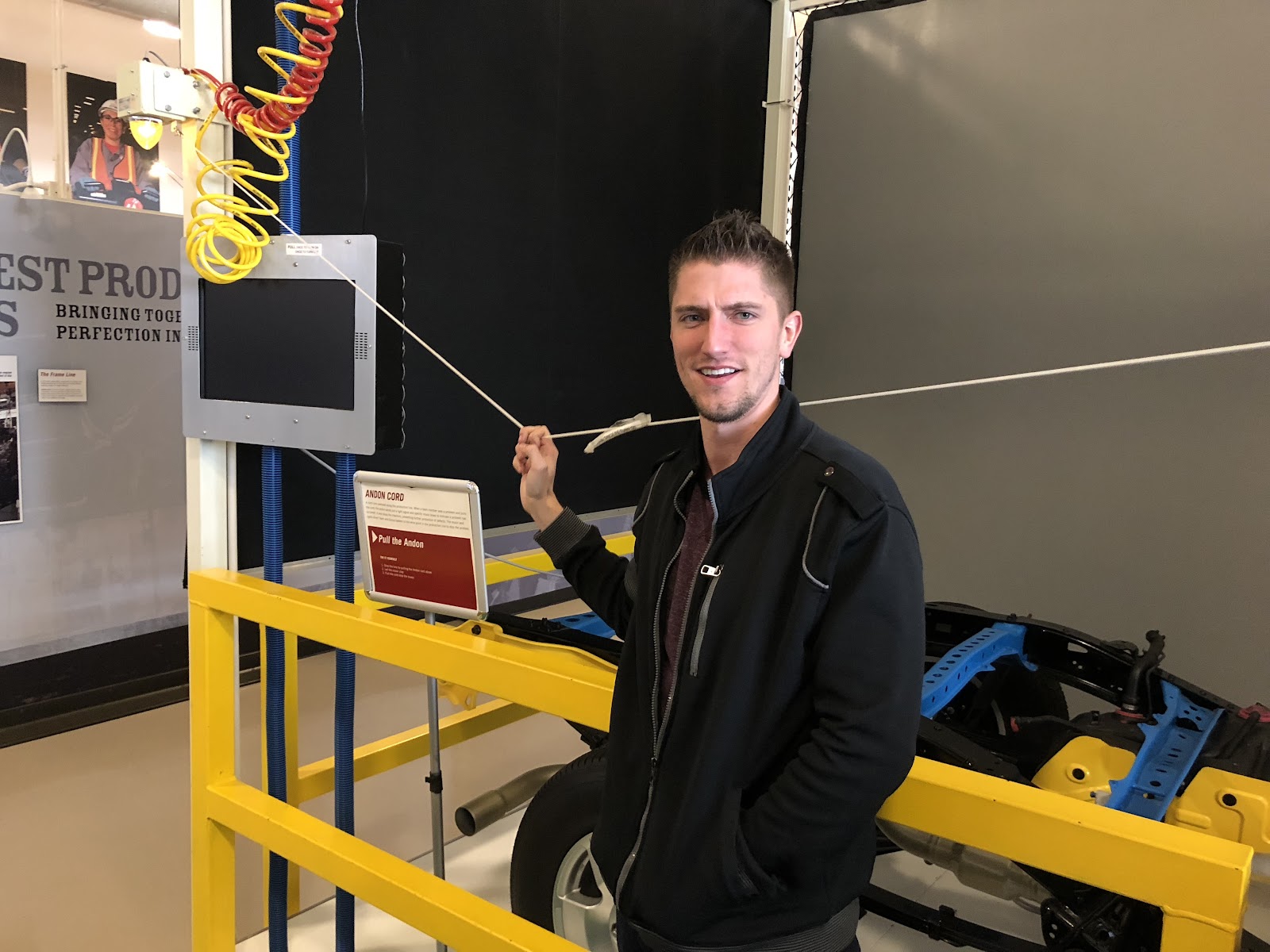 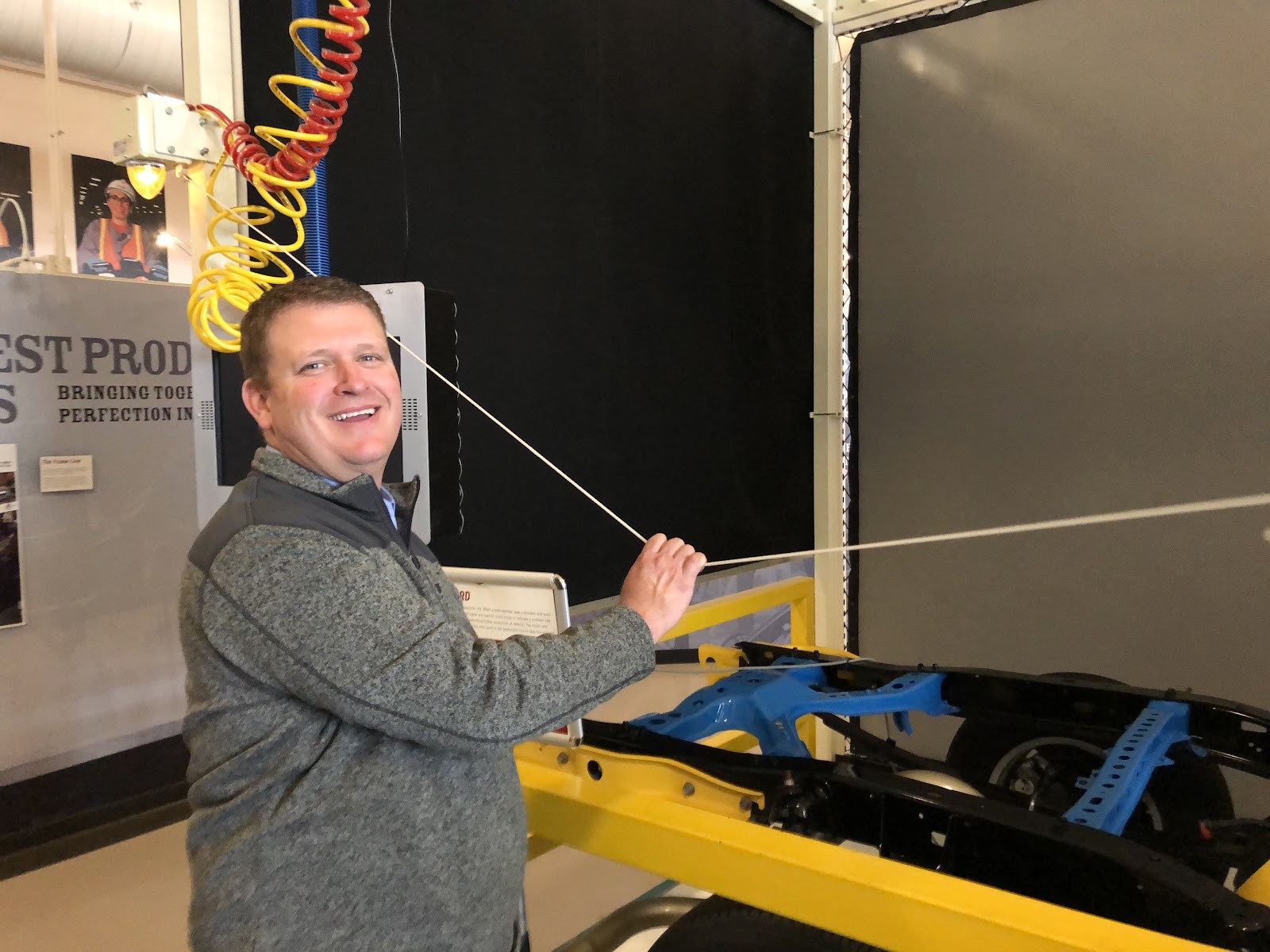 In the next photo, Clint Corley was pretending to look worried. There’s no reason to fear pulling the andon cord. Toyota encourages and celebrates the idea that you’d speak up and raise a concern, as our tour guide described during the tour. 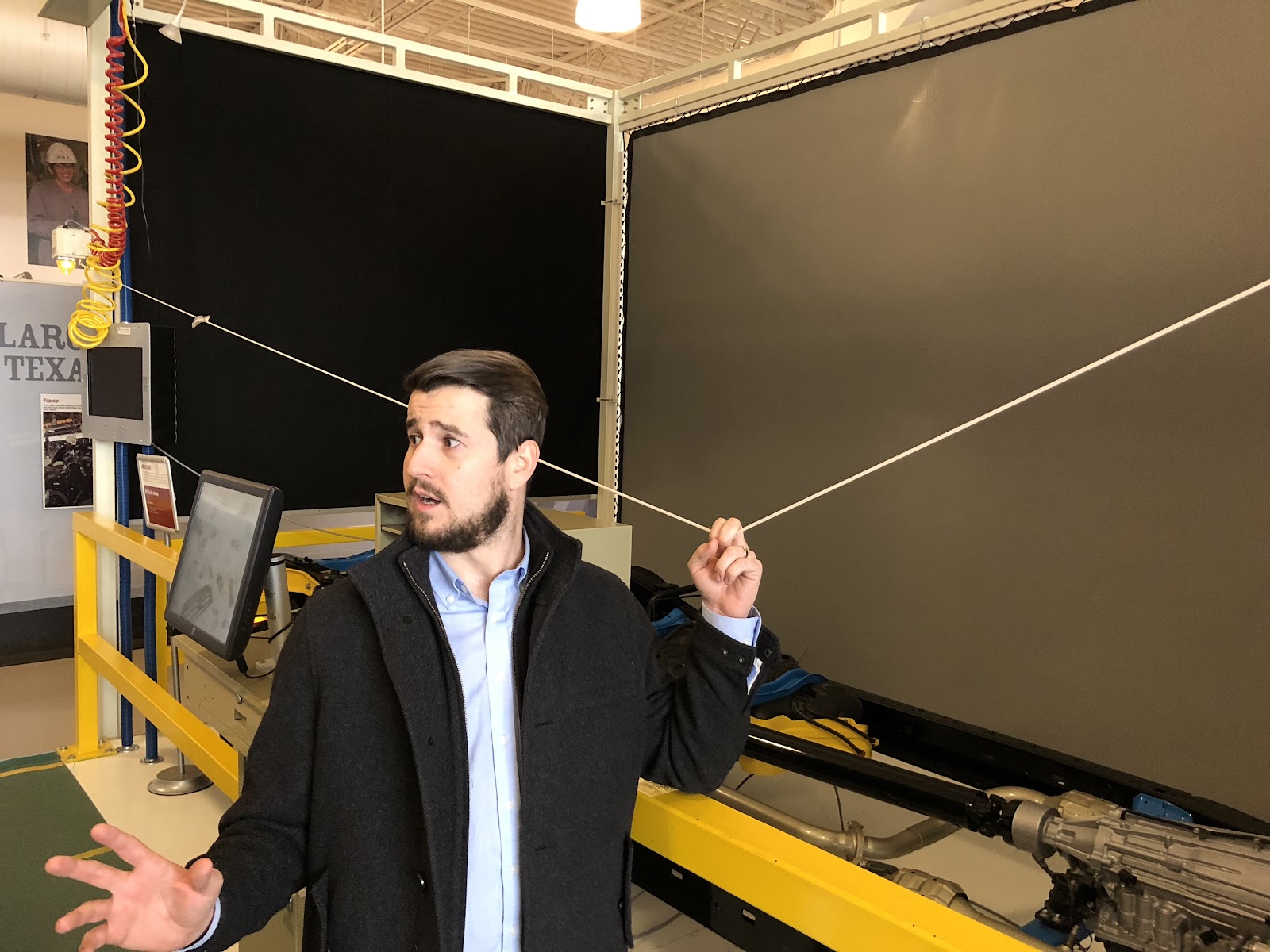 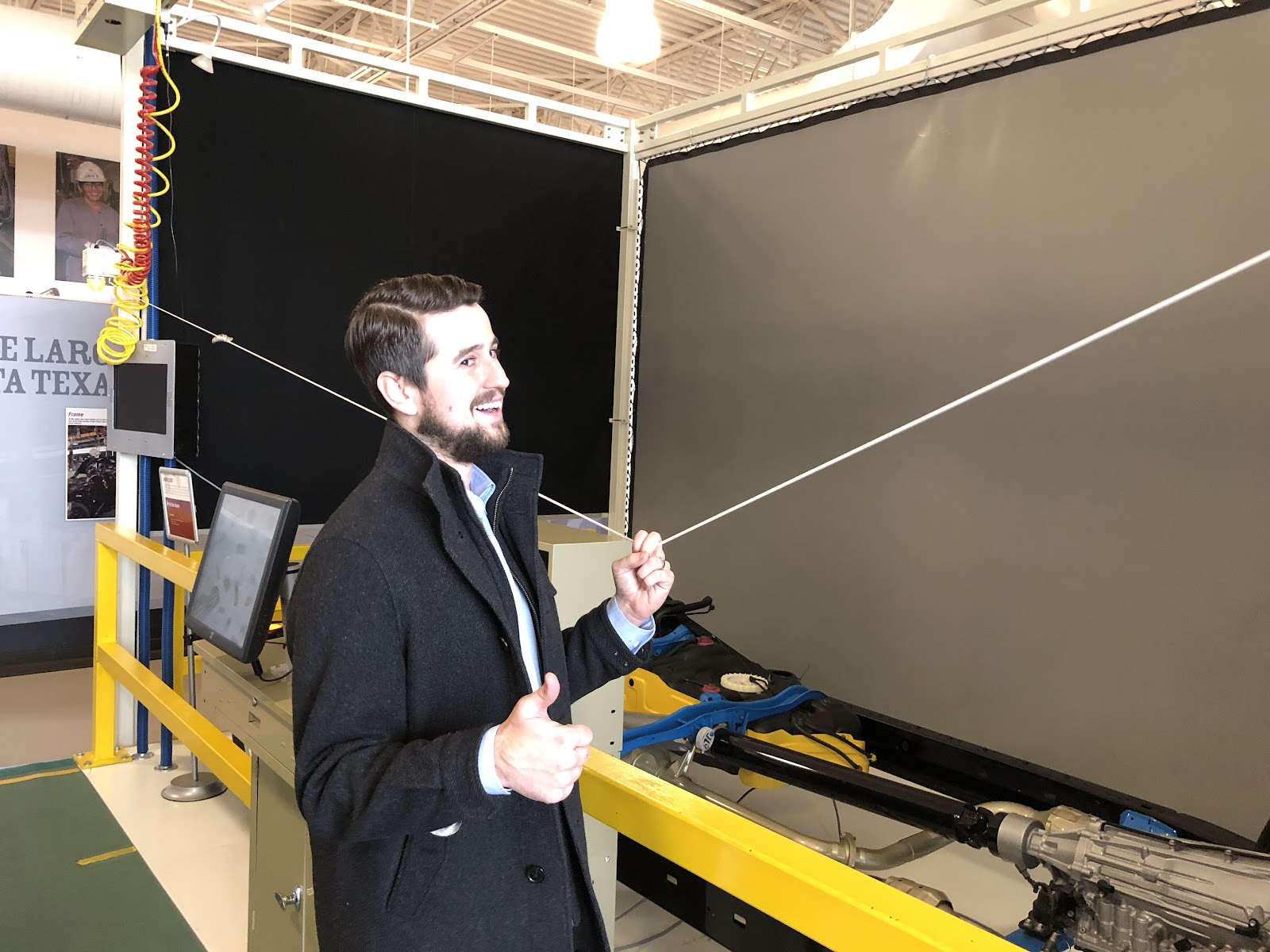 You keep pulling the andon cord, Clint. During our debrief discussion, we talked about ways to embrace this concept in a software company. We’re not going to hang a literal cord over everybody’s desks. But, we can create a culture in which people don’t hide or cover up problems. It’s better to speak up and resolve things. And we try to have a systems-focused blame-free culture, which is one of the ways you encourage people to speak up in the name of quality.

The music from the andon pulls was just part of the “sensory overload” that our CEO Dr. Greg Jacobson explained. There’s so much to look at when going through the plant: the process, the people, the signage, the robots, the metrics and Kaizen boards. It really is a plant worth visiting many times. I see and learn something new each time.

Jeff Roussel was impressed with Toyota’s focus on the long-term perspective, including the environment. 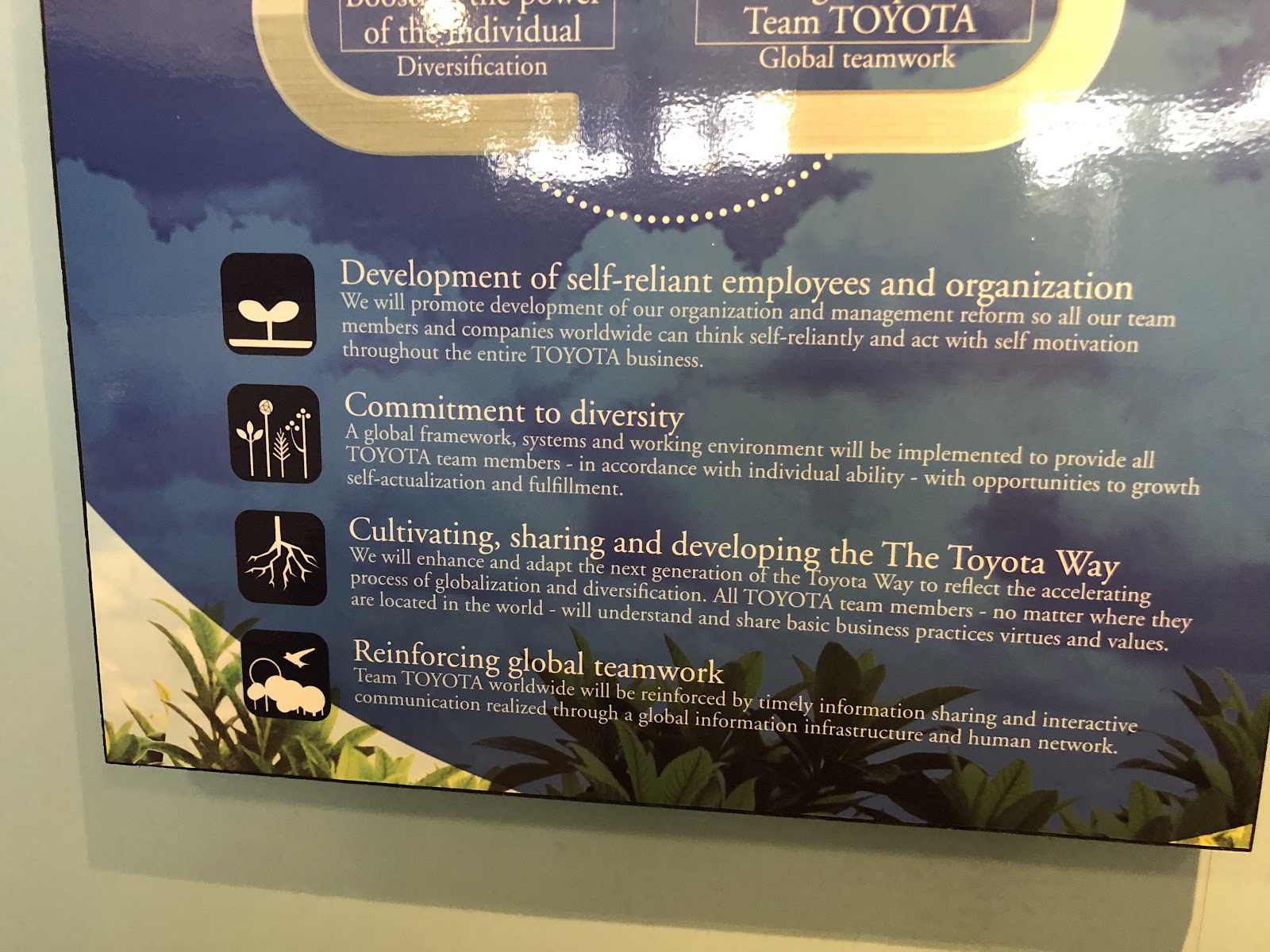 Jeff said, “Seeing their commitments and long term beliefs was very useful to me, that’s one thing that stood out. The commitment to the long term blew me away.“

On a lighter note, we laughed at how the Toyota display mannequin looked like one of our software developers, Jett Raines: 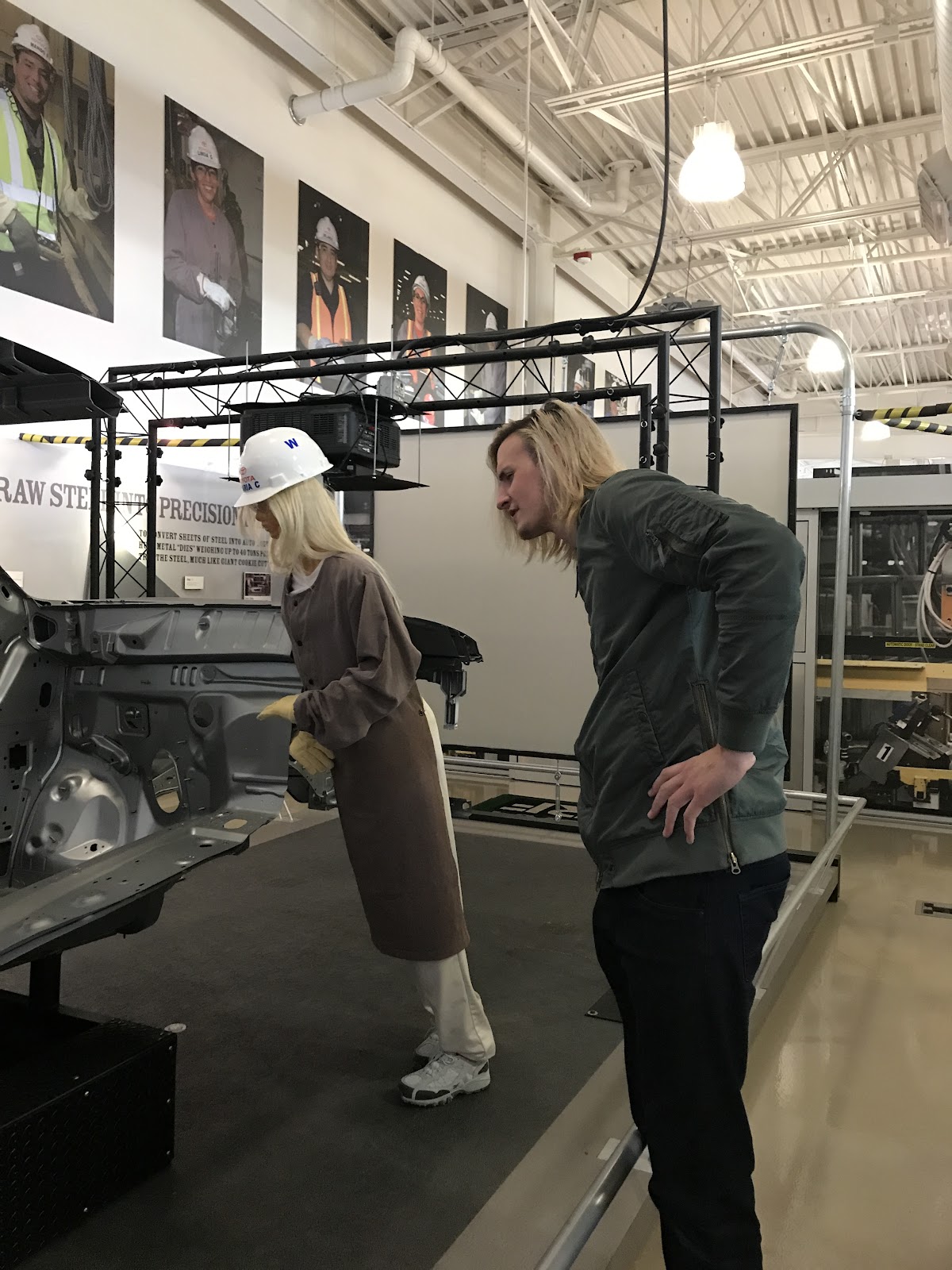 Other things that were noticed, during the tour, by KaiNexus team members included:

One other key takeaway was the pace and the environment. Greg noticed “there was no yelling” and that it was a busy, yet calm environment. Clint told a story from his days playing basketball, where a coach said to “be quick, but don’t hurry.” That seems to describe the Toyota environment. People are working with a purpose, but it doesn’t seem hectic. Clint said, “They were all working efficiently but nobody looked rushed.” People are able to look up and say hi and wave when a tour group is being brought through.

Our Jake Sussman asked our group to give one word that described their experience and what they saw. Here is a word cloud that represents our takeaways: 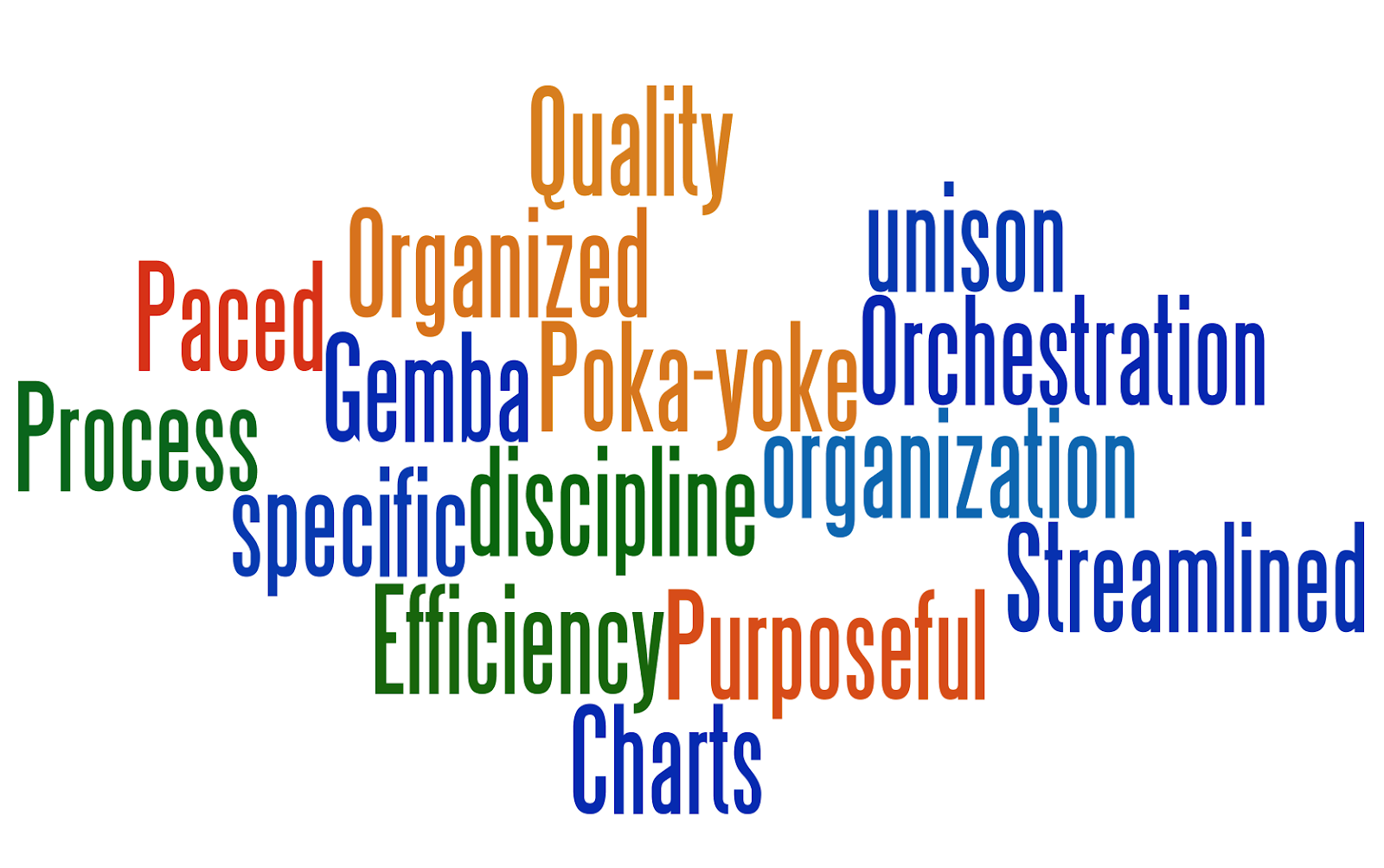 On the way out, we noticed how Toyota emphasizes how their trucks are “built by Texans.” Yet another thing Toyota and KaiNexus have in common - KaiNexus software is built by Texans, too. 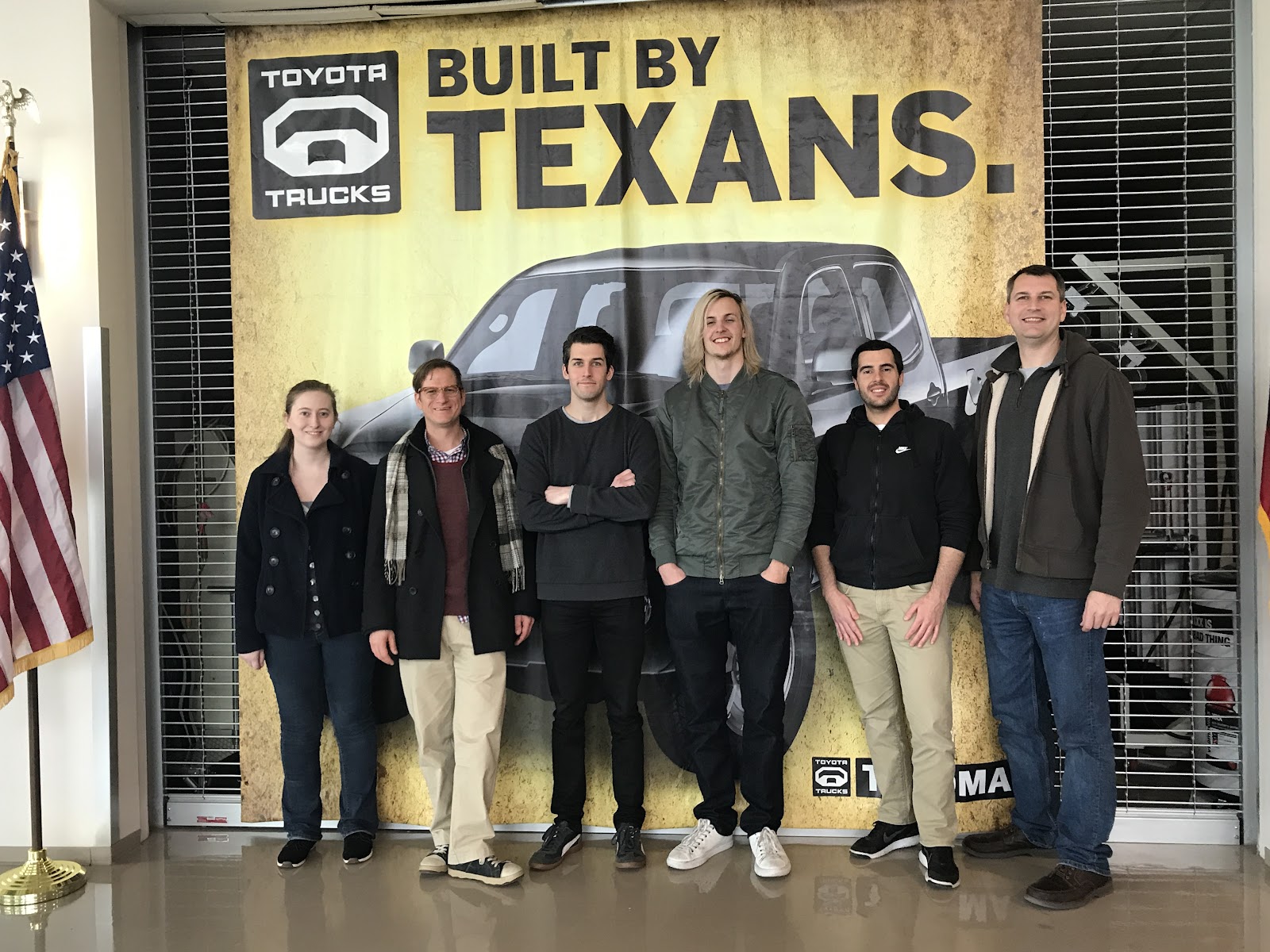 Have you visited a Toyota plant? What have you seen and learned? At KaiNexus, we’re inspired by companies like Toyota and our customers that are starting, spreading, and sustaining a culture of continuous improvement.