Are You Creating a Monster with Your Improvement Technology?

I recently watched a recording of a talk Dharmesh Shah and Brian Halligan gave at their annual “Inbound” conference last year. They are the co-founders of Hubspot, the revolutionary inbound marketing software that we use at KaiNexus. Their message brought to mind a problem that we hear about all too often in the continuous improvement community: Franken-Systems. You probably don’t call it a Franken-System - the term was coined by Dharmesh - but I bet you’ll recognize the problem.

Listen to the post via our KaiNexus Continuous Improvement Podcast series: 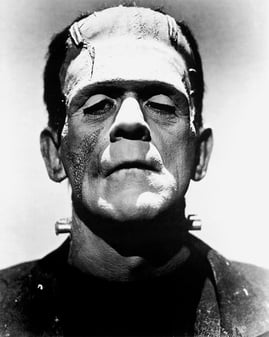 A continuous improvement Franken-System can take many forms. Perhaps a company manages daily improvement with a physical Kaizen board that hangs on the wall, and gets employee ideas from a suggestion box. They send email updates about the board. They want a permanent record of the improvement work, so they take pictures of the notecards and save them in a shared file. They do the same with A3s and Value Stream Maps. They list and organize their improvements by file name in a spreadsheet, so they can search them later. They use calendar reminders to follow up on old improvements. They turn to project management software for larger initiatives and task management tools to manage little improvements. They have a wall in an office dedicated to tracking the impact of improvement ideas. Every department has its own method for capturing, implementing, measuring, and sharing improvements. Some have even gone so far as to solicit the help of the IT department in building a SharePoint site.

In case you lost count, that’s over 15 different types of documentation for managing improvement work. These systems typically aren’t connected, or they’re connected in very manual and clunky ways. That is a Franken-System.

Franken-Systems are created with the best intentions. Someone started using each of those methods in order to do something new, improve something old, or organize something more effectively. Sooner or later, though, they wake up to find that they’ve created a monster, and the longer this goes on, that monster starts to deteriorate.

Over time, this Franken-System will be called on to handle more ideas and implement more and more improvements. In no time, the organization will not know who is participating and who is struggling. They won’t be able to respond quickly enough to new ideas, questions, or completed improvements; and very soon their employees’ enthusiasm starts to wane. Cross functional collaboration becomes a joke, and a lack of standardization makes reporting and measuring the impact of improvement impossible. The percentage of ideas actually implemented drops because they can’t keep up with the tasks, the data, the updates. Soon, everything falls apart, and they spend as much time bolting the monster back to together as they do actually improving their work.

Does this sound familiar? Have you devoted a portion of your life to bolting your continuous improvement monster back together?

So. What do you do when your monster stops working for you?

First, you need to give up on patching more pieces onto the Franken-System. Then, invest in one holistic piece of software that’s been specifically designed to do everything your Franken-System was supposed to do (and more), without the headache of managing a monster amalgamation of disconnected single-purpose tools.

There wasn’t a tool like that available for continuous improvement when KaiNexus co-founder Greg Jacobson needed it back in 2005, so he and Matt Paliulis spent the next decade developing it, testing it in real use, and improving it over time. KaiNexus now gives customers the ability to manage all of their improvement work from a single, user-friendly, adaptable platform. Hubspot has a similar story, and describes their mission similarly. As Dharmesh says, “We’re going to do all the things. We’re going to do all the things that need to be done so that we can get people off the sidelines and into the game.”

Do you need to have KaiNexus to spread continuous improvement?

You can build a Franken-System, and if you cobble things together well enough, you can keep up with all of these requirements - until you can’t. When that time comes and you find that you’re serving the monster instead of the other way around, take a look at KaiNexus.  For now, it is the only commercially-available technology that does “all the things” in a single system.

The ability to “do all the things” is something that you’ll only find in a platform developed for a specific purpose. If your purpose is to spread continuous improvement, then your system must enable you to:

Want to see if your organization is ready for KaiNexus or if it can cruise along with its Franken-System a little while longer?

Schedule a no-obligation demo today to see what KaiNexus has to offer.