Lessons on Leadership from a Grand Canyon River Trip

In July 2015, Mark had the opportunity to be part of a private permit 16 person, 16 day river trip on the Colorado River through the Grand Canyon. Prior to leaving, Maggie Millard challenged him, almost tongue in cheek, to return with stories about Lean. Little did either know or expect the lessons on kaizen, leadership, and continuous improvement that would emerge.

It is day 13. We are rafted up in the only shady cove we could find on the river this day. We are recovering from Lava. It is hot - well in excess of 100, but how high we do not know. It was lunch time and then nap time.

Lying across the rowers seat, I drifted off in a blissful afternoon nap as had become my habit each day. Most days we had hiked into a narrow slot canyon and found a ledge of Tapeat’s sandstone to lie out, or sometimes we had found a large rock patio, bisected by a trickling stream, surrounded by shade trees in an oasis, serenaded by the canyon wrens.

One day David, my son, and I drifted side by side holding on to each other’s kayak in one of the many calm stretches that make up most of the Colorado River through the Grand Canyon. I abruptly awoke to look over and see he was also asleep. How long we had drifted like that, I do not know. 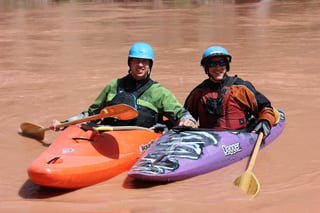 But on this day, I was abruptly brought  back to consciousness by a loud bang near my head. It seems the group was discussing our destination for the night and there was some disagreement about what camp we should try to get to. As trip leader, 15 sets of eyes were focused on me to make the choice. It took me a few minutes to recognize just what was going on.

For me, the usual  guideposts of time, calendar, and mile markers had ceased to be valuable. Rather, it was the sun, the shade, side hikes, and the river that best defined and guided our day. But some people on the trip had yet to fully get to the same place as me. For them, the certainty of the destination was important. I listened to their ideas as much to get the cobwebs out of my head as to hear their concerns. One of the younger group members had spent considerable time reading about the possibilities and expressing her belief about one particular camp at mile 205. A more experienced group member  thought it was too far to go and opted for a closer camp at 197. There were also camps at mile 202 and 207. They wanted an answer. 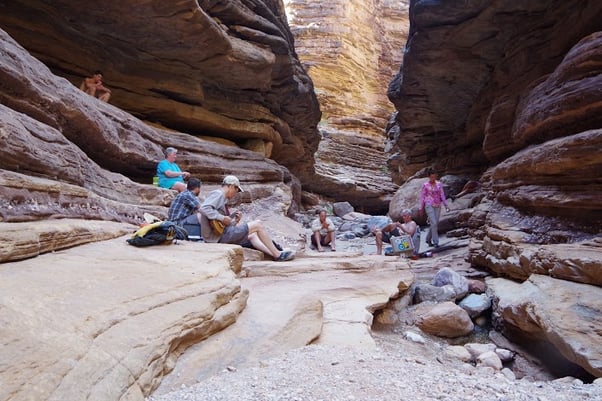 ‘Well,’ I said after careful consideration, ‘whichever has shade and looks good. That’s where we should go.’ You might imagine this was not well received, but then I was trip leader. I wanted to encourage that younger group member to take the initiative to research whatever issue interested her, but I had previously looked at the map and had a pretty good idea we needed to get around 205 in order to set us up for reasonable subsequent days in still arriving at Diamond Creek by day 16. I also knew that each of these camps were oriented along a north/south stretch of  river making each likely to have early shade depending on its exact location.  But until we saw the beach we would not know if we were arriving too early. And if the beach was still in the sun, it would be too hot to be worthwhile stopping. Might as well stay on the river and keep going. 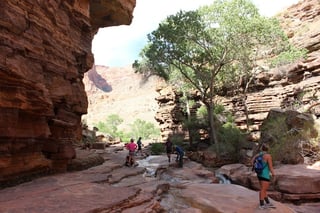 We headed downriver drifting and watching for bighorn sheep, as we descended, noting the appearance of the next rock layer as it lifted above the water. Although a nice camp, 197 was still in the sun. Late in the day we hit camp at mile 205 with the sun just at the rim. There would be shade in 15 minutes.  The group applauded that younger member for making a great choice, but in truth, we all agreed this was the place to stop.

Leading is not really about making the choices or providing the answers. It is about clarifying the sorting criteria by which those choices and decisions can best be made. Clock, calendar, mile post no longer mattered.  Sun, shade, hikes, and river did. The best decision for the group given the particular circumstances at that time was something we would have to discover together, but by applying the same sorting criteria, the group came to a shared decision each person could get behind…together. And in the mix, a group member also gained some confidence. 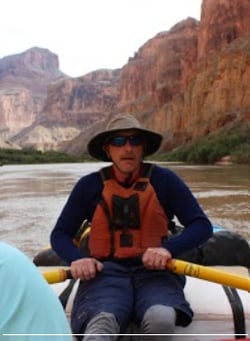 Mark has worked as a residency trained, board certified emergency physician for 30 years. His initial immersion into Lean came in 2008 while living and working in Taupo, New Zealand, where he had the opportunity to test Lean methodology while leading implementation efforts at the hospital there. After returning to the US, he continued to apply these concepts in emergency departments, hospitals, clinics, and regional collaborations, with a particular focus on how this can inform individual work. Observing the successes, as well as the trials and tribulations, led Mark to delve further into why this stuff works. His soon to be released book, Free the Brain: Overcoming the Struggle People and Organizations Have With Change, takes a look at what neuroscience research says about how the brain operates and provides some real insight into why organizations do, or don’t, function so well.