These Are a Few of My Favorite... Reports

There are 20 different Reports in KaiNexus - 25, if your organization is using the Incident Reporting Add-On. That’s a ton of data at your fingertips. Today, I thought we’d talk about some of my favorite activity Reports. 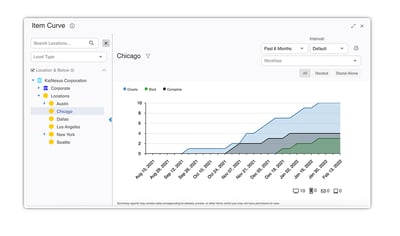 The Improvement Curve shows the number of submitted and completed Improvements in light and dark blue, respectively. You can control over what time interval, Locations, or various other filters data should be drawn, as well as decide whether only Improvements that are nested under Projects (called “Project-Based”), Improvements which are not nested (called “Stand-Alone”), or both should be included.

You can also add a yellow Target Line to the curve to track a goal.

You can even see how many Improvements were submitted via the desktop app, mobile app, or email in the bottom right corner of the Report.

If you want to learn more about the value of small improvements, check out this video. And for more information on the importance of identifying, reporting, and solving problems, this is the video for you. 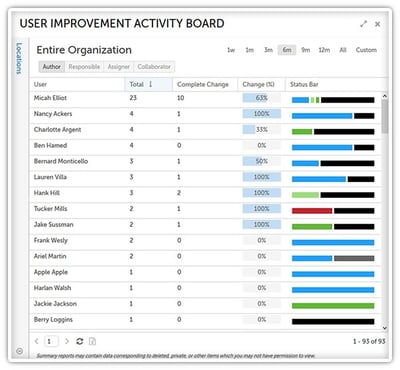 This Reports shows how much activity a person has had in the system, according to what roles they played on every Improvement. You can control over what time interval, Location, or various other filters data should be drawn. As with the Improvement Curve Report, you can decide whether only Improvements that are nested under Projects (called “Project-Based”), Improvements which are not nested (called “Stand-Alone”), or both should be included.

It breaks down the number of Improvements completed with a change and the current status of each of the Improvements. You can click on any column to drill in to see the actual Improvements being reported on.

This Report is vital for managers and continuous improvement coaches to see who is doing well and who needs help. Look for:

To learn about the importance of finding something to implement, I'd recommend watching this short video.

This is an incredibly helpful Report for continuous improvement coaches to see how fast Improvements are passing through the improvement cycle. Look for:

For a quick primer on the importance of respnding quickly to employee engagement, give this video a view.

These are just a few of the Reports KaiNexus offers. In fact, each of these Improvement-based Reports has a Project-based counterpart!

What are some of the Reports you use on a regular basis? We’d love to hear from you.