Our development team has been hard at work in the past few weeks to bring you 19 new features, improvements, and bug fixes. Here are some of the highlights: 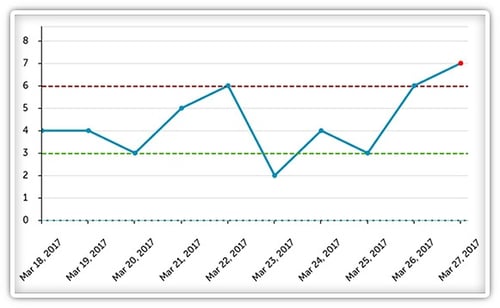 With this latest version of KaiNexus, you can create even better control charts to monitor performance. The best part? You can set the chart generate an alert should the data become out of control. That way, you’ll never miss out on important information.

So what happens when data is outside of the control limits? A red exclamation point will be displayed alongside the chart’s name on any list of charts. And if you enabled “Generate Flag,” every member of the chart’s team will get an alert.

We’ve given you even more control over who can access what in KaiNexus with this release. We’ve added a new set of permissions that revolves around the Reports section. You'll notice the following user roles have been added:

** NOTE: Everyone currently in your organization’s system has been granted a new Role called “KaiNexus Reports User” that contains both of these permissions, so things will look the same to all users after this update until you make changes.

Add a target line to the Improvement and Project Curve Reports 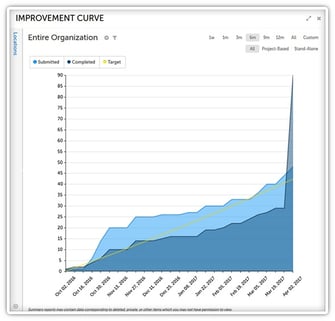 You can now add a target line to the Improvement Curve and Project Curve Reports so that you can make sure your organization’s improvement efforts are meeting your goals.

The target line is based on the annual target rate calculated by multiplying the annual submission target you set by the number of active and offline users in that Location divided by the timeframe set for the Report. You can set a different target rate for each Location. If no Location is selected, then the target line is for the organization as a whole.

These are only some of the awesome changes we’ve made; there’s still lots more for you to explore. What new features are you most looking forward to using?