What To Do with Bad Ideas

If you’ve ever worked with a traditional suggestion box system, you’ve probably encountered one of its greatest problems - that ideas are discarded as “bad” ideas without the person making that decision ever talking to the person who submitted it. In fact, it’s not unusual that only 2-3% of suggestions get approved and implemented.

If you’re working on a team and you see everyone’s ideas go into the box and never come to fruition, it’s understandable that you would get discouraged enough to stop submitting your ideas entirely.

We at KaiNexus believe in a more modern practice, where leaders are encouraged to work with their employees to collaborate on the implementation of their ideas. Even if the suggested improvement isn’t the best fit or a realistic idea, leaders should still work to find something to implement that will address the opportunity for improvement. You never want your people to walk away feeling like they weren’t listened to, even if the result wasn’t what they initially pictured.

Remember how I said the typical suggestion box yield and implementation rate of only 2-3%? Toyota is a good benchmark for a Kaizen system like this - it’s said that 90% of their employee’s ideas are implemented because they know how important it is to always look for something to implement that addresses their team’s ideas and observations. 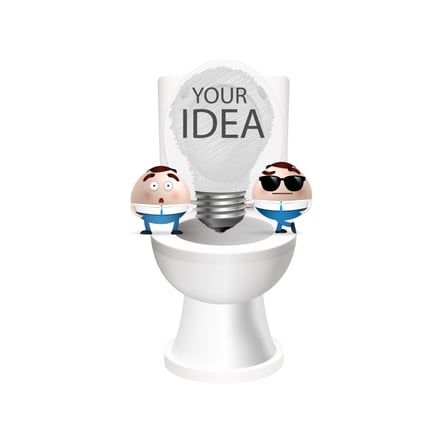 Many of our customers, operating under that same principle, are coming close to that goal - 76% of all submitted opportunities for improvement lead to some sort of positive change!

With that kind of implementation rate, people working at those companies - from the C-Suite to frontline staff - know that if they submit an idea, they’ll be taken seriously, listened to, and will probably see a positive result.

And supposing their idea isn’t implemented, the submitter will receive feedback explaining why it couldn’t be done so that they never feel like they were just shouting into the void when they offered up their idea.

Take one of our classic examples: A member of your team submits an idea to build a brand new parking garage. A traditional improvement committee will almost certainly discard the idea outright based on cost. But if you dig into the source of this request, you might find out that the employee submitted the idea because customers have been complaining to her about getting wet when it rains. So instead of building a whole new garage, you might decide to offer extra umbrellas or add some reserved visitor parking spaces closer to the building. The customers will be happy, which will make your employee happy, which will make you happy!

Now, I’ve talked a good bit about how awesome it is when ideas result in a change, but ideas that aren’t implemented are valuable too!

For example, KaiNexus lets our customers come up with a list of  “No Change Reasons” that can be applied as a basic explanation to an improvement that won’t be implemented. A common “No Change Reason” is “This is already part of our Standard Operating Procedures.”

That is an incredibly valuable option because if someone submits an idea that is actually what standard protocol says they should already be doing, you’re able to find a gap in training, they’re able to be taught a better method, and you’ve created a permanent log in KaiNexus so that if anyone else runs into the same trouble, they’ll see the relevant information.

Do you have any awesome stories about how you found something to implement? We’d love to hear from you!