The Great Ideas that Came from Last Year's User Conference

We at KaiNexus cannot wait for our 3rd annual User Conference in Austin! We’re bringing together some amazing continuous improvement professionals representing organizations in a variety of industries that have decided to invest in building a culture of improvement.

Here are just a few of the improvements that were suggested that you might recognize: 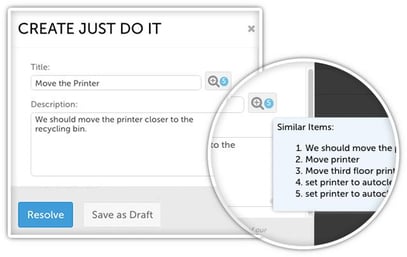 When you have an idea, it’s important that you check to see if anyone else has already submitted or implemented that idea. Otherwise, you run the risk of reinventing the wheel.

One of our conference attendees pointed out that it would make people’s lives easier if they could check for similar existing items during the submission process.

We took that idea and ran with it! Now, when you’re submitting a Project or Improvement, you’ll see a magnifying glass next to the field where you enter its title. If there are any items in the system with similar keywords, a badge will be added to that icon to let you know. You can hover over that icon to see a list of just the titles of those similar items, or you can click the icon to open a more detailed view. 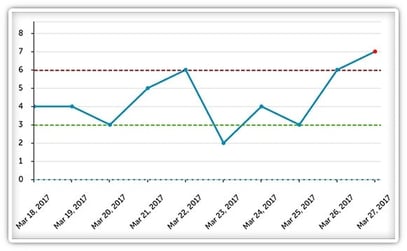 It was also suggested that we add a control chart functionality that would automate some of your work. You could manually build out a control chart before this, but it took a bit of time and you had to monitor it yourself.

Now, making a control chart is super easy. Clicking “Options” when editing any chart will open a window with a bunch of settings, including your control limits - lower, average, and upper. You can set your limits to any value and pick which color should represent each one on the chart.

You can even have the chart generate an alert should it become out of control. That way, you’ll never miss out on important information.

See who was notified

When you create or escalate a Project or Improvement, you’ve probably noticed a popup appear that lists the names of everyone who was notified about this action.

This time last year, once that popup went away, you couldn’t see that list again. One of our customers suggested adding that list to the timeline so that it could be referenced later.

That made a whole lot of sense, so we did it! Now if you want to know who was notified about a submission or escalation, you can hover over the “[User] submitted this” timeline entry and the list of notified people will be displayed.

Add filters to the calendar

When it was in its early stages, the KaiNexus calendar was pretty rudimentary. You could decide whether you wanted it to display your Projects, Improvements, or Tasks, but not much more than that.

One of our customers asked to be able to filter the calendar by his relationships to each item - e.g., he only wanted to see Improvements that he authored, but not those he collaborated on.

Our development team was feeling particularly awesome at that moment, so they took it a step further. Today, you can filter the calendar by the type of item, which users were involved with it, what role they filled on it, and which Locations were affiliated with it. You can even decide whether you want its start and end date to be shown, or just the end date.

That’s just a few examples of the fantastic opportunities for improvement our customers have given us, and getting more ideas is just one reason why I’m looking forward to this year’s User Conference!