How I Learned the Habit of Exceptional Cross Functional Teams 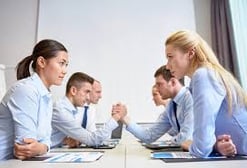 When I was 22 and just starting my career, I was the administrative assistant to the President of a software company. One of my responsibilities was to take the notes in the weekly executive meeting. I wasn’t expected to participate in the meeting, just to document the discussion. At one point we hired a new CIO. He was a distinguished technology executive with many years’ experience. He was also European and intimidating as heck.

One day, he proposed something in the executive meeting that I knew would be bad for our customers. I’d been the customer support admin before this role and I knew how painful, expensive, and unpleasant the proposed change would be for our clients, yet everyone in the room agreed to it. I sat quietly as everyone left the room. Then I started to cry. Just a little. A few minutes later, George, the president, came in and asked me what was wrong.

At first I denied there was anything. I was only in the meeting to take notes, after all, and who was I to question the entire executive team? I’d only had this role for a few weeks and didn’t want to seem like a troublemaker. But George was persistent and eventually I told him what I thought about the terrible idea. Then he said the most important thing anyone has ever said to me in my career.  He said, “If you don’t tell me what you think, you aren’t of any use to me.”

“If you don’t tell me what you think, you aren’t of any use to me.”

This fear of conflict and desire to stay within the bounds of ones role are common impediments to cross functional teams that work. Disagreement, it turns out, is the key to organizational thinking. Ideas rarely pop out of someone’s head ready to go. They need to be tested. The rough edges need to be smoothed out by people with different prospective questioning assumptions. A cross functional team with no conflict isn’t functioning.

In a 2012 TED talk called “Dare to disagree,” Margret Heffernan explained, “In surveys of European and American executives, fully 85 percent of them acknowledged that they had issues or concerns at work that they were afraid to raise. Afraid of the conflict that that would provoke, afraid to get embroiled in arguments that they did not know how to manage, and felt that they were bound to lose. Eighty-five percent is a really big number. It means that organizations can't think together. And it means that people like many of us, who have run organizations, and gone out of our way to try to find the very best people we can, mostly fail to get the best out of them...But when we dare to break that silence, or when we dare to see, and we create conflict, we enable ourselves and the people around us to do our very best thinking.”

It's been more than 20 years since that executive meeting and I haven’t stopped saying what I think ever since. (Frequently to George, by the way, we’ve worked together at 4 companies since then.) It might be worth reminding your organization that conflict on a cross functional team isn’t taboo, it’s utterly necessary.