Improvement Consultants: How To Track Your Impact 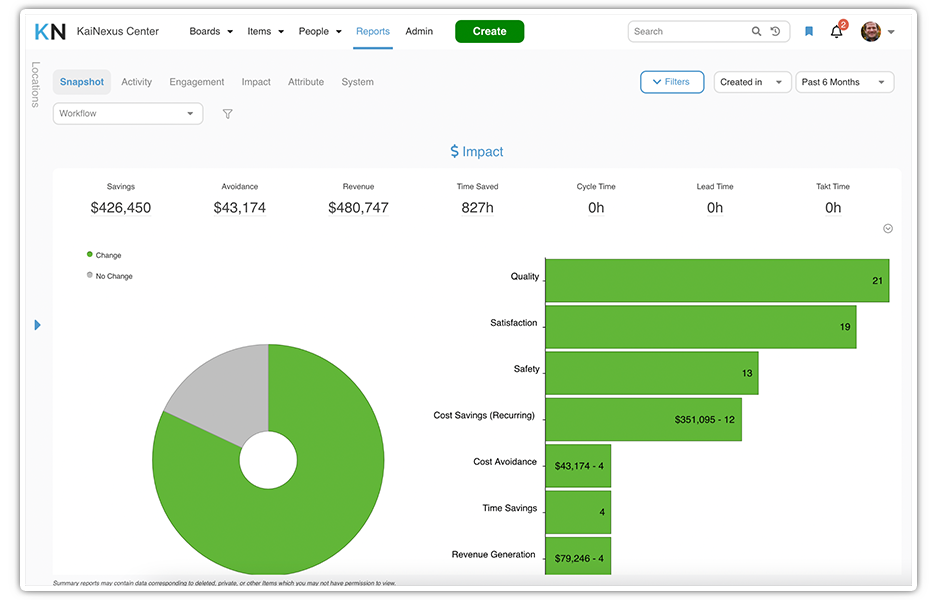 Tracking the impact of a continuous improvement program is one of the most difficult challenges that an incoming consultant may face. As difficult as tracking impact is, it is also one of the most important metrics to measure. Organization leaders want to see a return on their investment of a consultant, and being able to capture the results of the improvement program is the easiest way to do so.

Most consultants capture the impact of improvement using spreadsheets or Sharepoint - if they are even able to capture impact at all.

There are a couple issues with this.

END_OF_DOCUMENT_TOKEN_TO_BE_REPLACED

A More Effective Measurement of Improvement for Lean Consultants

Without a doubt, a Lean consultant’s most important job is to help plant and a grow a culture of continuous improvement in an organization.

Speaking with many consultants, I find that one of their biggest worries is that when they finish an engagement, they will come back a few months later to find that plant that they worked so hard to grow is wilted and dying.

An improvement culture cannot be created with a “drop and grow” approach; it needs careful maintenance to grow strong. However, it isn’t easy to measure the health of an improvement culture with spreadsheets or SharePoint files. While a plant gives warning signs in multiple ways, a spreadsheet does not. The only way to know if a culture is failing is that the spreadsheet won’t get filled out.

For consultants, bringing a continuous improvement software platform into their repertoire gives them the ability to conduct health checks on their clients without even being in the building. Software keeps track of due dates, engagement and participation rates, giving consultants and improvement leaders added tools to keep growing their culture.

Specific boards and reporting capabilities partnered with powerful filtering features within continuous improvement software give the ability to see not just an entire organization, but to dive down into specific department or location levels.

Here are three examples of the powerful tools at your disposal:

END_OF_DOCUMENT_TOKEN_TO_BE_REPLACED

How Consultants Can Use Improvement Software To Their Advantage

Our CEO, Dr. Greg Jacobson, has a cartoon hanging in his office. It must be pretty popular, because I found out Mark Graban actually referenced it a few years ago in this post.

The cartoon depicts a medieval king preparing to fight a battle with swords and shields - and a guy selling machine guns. The king is so focused on his next task, he is ignoring the salesman trying to sell him modern weapons, which would easily carry his army to victory if he took a moment to think about it.

This cartoon is funny because of the parallel between this situation, and one that we often come up against in sales. People are often so busy fighting fires that they’re unable to take a step back and find a solution for the root cause of those fires.

I liken spreadsheets and Sharepoint to the swords and shields in the cartoon. It might be obvious that modern weaponry would provide a great advantage in a medieval battle; it's not always so clear to lean consultants that software can provide a huge value-add to the way they serve their clients.

Retiring Excel and Sharepoint in favor of continuous improvement software offers some key advantages: it saves the time spent building and maintaining the tool, allows consultants to focus on improvement work, and is optimized for the job.