We had the pleasure of presenting a webinar hosted by Chad Westbrook, a manufacturing engineering manager and AGCO production system manager at AGCO Corporation. AGCO is a full-line manufacturer of agricultural equipment. The company makes everything, including tractors, tillers, sprayers, bailers, and other equipment. Chad joined our own Mark Graban to discuss a different way of thinking about problem-solving. This post is a recap of the presentation - watch the full thing for all the details!

A Structured Approach to Problem-Solving 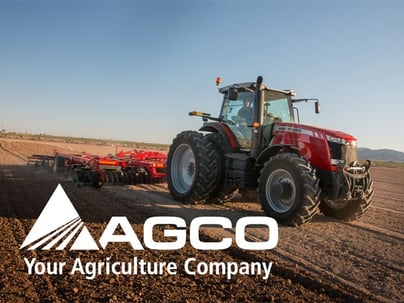 In this webinar, you'll learn a structured approach to problem-solving using the following tools:

Chad explained that the Heston, KS plant where he is based produces a complex array of multiple product types and brands. Like many other companies, the standard way of addressing issues in the past at AGCO was to react and contain the issue when something came up. The Leadership team realized that this band-aid type approach was not really solving problems. It just covered up issues. Good product went out the door, but it wasn’t uncommon for the same problem to creep up time and time again.

The team decided to change old habits by developing a structured problem-solving process for the Heston facility. The approach leverages several tools including 5G, 5W1H, 4M1D & Confirmation, the 5 Whys, and levels of countermeasures. AGCO also implemented KaiNexus to support every aspect of the new problem-solving paradigm.

At AGCO, the process begins with a close look at the “initial phenomenon,” also know as anything that is creating an issue for anyone at the Heston site on a given day. The purpose of the structured problem-solving process is to identify the root cause and apply an effective corrective action. Starting with the initial phenomenon establishes the finish line for the team. Once the countermeasures are implemented, they can verify that the initial phenomenon has been resolved.

5G is a tool used to describe a loss phenomenon. It can be related to safety, quality, a minor stoppage on the line, a major breakdown, lengthy set-up, a parts shortage, etc. The purpose of a 5G is to describe a situation in a complete and detailed way, to keep a proper relationship between theory and practice, and to follow a logical flow during the process.

AGCO uses the 5G tool during the first phase of the problem investigation. They typically walk through it with the 5G1H form so they can fill it out as they understand the problem.

Gemba means the real place. It involves going to the place where the original phenomena occurred. Then the team starts walking that back through the processes to see who needs to be involved in the solution. Visiting the workplace where the problem happened helps the team avoid making assumptions about the issue. There may be things that would otherwise be missed. Before structured problem-solving, sometimes countermeasures were applied based on incorrect assumptions.

Gembutsu means the real things. The next step is to examine the materials, process, machinery, people, and objects that are actually involved in the event. Most of AGCO’s work involves creating their own parts, so because of that complexity, they must often include several different value streams and departments to fully understand the evolution of that part through assembly.

Genjitsu calls for the actual facts. Problem-solving requires getting the real facts and actual data, what you can observe with your own eyes. The goal again is to separate facts from assumptions. Here the team takes into account things like how the part was designed and the tools used to make it, along with the assembly process that is used.

These first three “Gs” are the main focus of the team. They get leaders to the shop floor, instead of trying to solve the issue behind the desk.

Genri and gensoku are necessary when the previous steps do not reveal the causes of the problem. Generi involves principles and theories that come into play when there is not a standard for a particular process. The operator shares what they believe the theory is supposed to be. That leads to gensoku, or standards & parameters. At times, planning may be to blame for problems with the part or production. Operators may be compensating for incorrect standards or lack of information.

5W1H – Phenomenon Description (What, When, Where, Who, Which, How)

The 5W1H is the tool that is used to determine what the revised phenomena will be. In manufacturing an initial phenomenon is a deviation between the current condition (what is) and the desired condition (what should be) with an unknown cause for the gap.

When AGCO walks through the 5W1H, the first step is to get a full statement from the person experiencing the problem and define the problem condition, so they know what the desired state is. The object is to describe the revised phenomenon or to make visible what currently cannot be seen.

For example, AGCO uses a micrometer to check the sizes of shafts to determine if a part meets specs or not. In one experiment, the team asked three different people to measure the same shaft, and they got three different measurements. That identified a gap that may have contributed to the initial phenomenon. When the analysis is superficial, or assumptions are made, the scope of the problem to be fixed is broadened, leaving the team a lack of direction in terms of solving the initial problem and many possible causes to consider. 5W1H and 5G help narrow the scope, getting to the root cause faster.

The 5G1H form starts with necessary information including dates and team participants and a clear statement of the problem. The first step is to initiate the containment process. The team determines if any containment measures are necessary, whether damaged or failed parts are accounted for, and how to prevent delivery to any other customers. Immediate actions must be documented and known to all parties involved. This usually involves a cross-functional team.

Once containment is defined, the first “W” in the 5W1H is addressed – What? The team determines what happened, what is the phenomenon, and whether it can be reproduced. Using the 5 G, they define what machine, product, or material is involved.

The next in line is the when. When did it start? Was it associated with moving from shift to shift or introducing a new model? When in the process does it occur? Do we see a pattern?

That leads to where. Where did we see the phenomenon? Where did it occur? Depending on the issue, they may ask where on the equipment or material. This helps in understanding containment and narrowing the scope of the possible causes.

After that comes who. Who is doing the process? Who does the problem affect? Who can generate the phenomenon? Could the problem be skills related?

The final W is which. Which trend or pattern does the phenomenon have? Which direction are things trending? Which factors influence the occurrence? Is the problem related to any process variable? This helps find the revised phenomenon.

The 1H stands for how and how many. How is it being done? What is the extent of the phenomenon? Is the process in control? How is the state of the equipment changed from the optimal? How many times does the phenomenon occur?

Once all of this is identified, the team can get to a revised phenomenon.

The result of the duly executed 5W1H is a narrow focus on the problem to identify the revised phenomenon.

The next step in AGCO’s approach is using the 4M1D fishbone diagram, an industry standard, and fairly universal tool. This is how the team starts understanding the contributors to the revised phenomenon. The revised phenomenon is inserted into the fishbone diagram, and the major categories of the 4M1D are considered. They include material, method, machine, man, and design. Other “Ms” that may have an influence are mission, mother nature, management, money, and maintenance. The fishbone diagram can be adjusted to meet the needs of a specific issue.

As the team starts walking through the different issues, they fill out the significant contributors using brainstorming to document all of the factors. Once the list is complete, they begin the analysis process and remove any trivial items. Typically, four or five contributing elements are selected.

Next, the team transfers the important causes to the Confirmation form that includes the 4M category, the contributing factors, and a check to determine whether the 5 Whys should be applied to each factor.

The 5 Whys is another standard tool from the Lean methodology. It is a simple problem-solving tool that helps users identify a countermeasure. AGCO starts by asking Why the problem is happening. Asking is simple, but answering requires thought and intelligent application, so the path from the revised phenomenon becomes clear. AGCO uses KaiNexus to see if they’ve addressed the same type of opportunity in the past.

The number “5” is not important. The goal is to continue asking “why?” until the team has reached an effective countermeasure and can go no further.

Chad shared an example. Coolant was discovered on the factory floor. The team asked why and determined that coolant was leaking from the machine. They asked why again and found that a seal was damaged. In the past, the solution would have been to simply replace the seal and stop the leak, but asking why one more time revealed metal shavings in the coolant. Why? The coolant pump guard allowed the shavings to pass behind the coolant screen. Now the team understood the root cause of the coolant leak. This led to an effective countermeasure, which was to design and install a new guard over the screen.

Levels of Countermeasures and Controls

At the Heston location, AGCO uses four different types of countermeasures. Which is used depends on cost and risk. They include:

Defect Elimination – Error proof the product or process completely to eliminate the opportunity of making a defect.

Defect Prevention – Mistake-proof the product or process to minimize the chances of making a defect.

Defect Detection – Test, validate or inspect the product to catch defects before they are passed on.

Defect Awareness – Use visual controls, training, documentation, and communication to give operators information that may help prevent defects.

Chad shared another example that covers the typical problem-solving approach at the Heston facility.

The problem involved air leaks in the air ride suspension of a new model of wind rower. Using the 5G process, the team went to the factory floor and examined the object. They then went through the design to understand the intent of the design and each component.

We are very grateful to Chad for sharing the details of how AGCO approaches problem-solving. They are an excellent example of how thoughtful processes can help organizations get to the root cause of issues and address them effectively using these techniques along with the KaiNexus solution. You can watch this webinar and check out other informative presentations here.