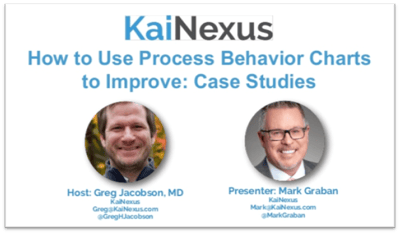 We recently had the honor of hosting a webinar with our Senior Adviser, Mark Graban, author of Measures of Success: React Less, Lead Better, Improve More as the presenting guest. Mark’s new book focuses on managing variation, understanding data, and leading improvement. Mark has been a part of KaiNexus in various capacities since 2011. In Addition to Measures of Success, he is also the author of Lean Hospitals, Healthcare Kaizen, and Practicing Lean.

Over the last couple of years, Mark has been interested in how organizations can use data to differentiate between signal and noise. This post is a recap of Mark’s presentation. However, the webinar contains many more valuable examples, so we highly recommend that you watch the webinar.

In previous webinars, Mark Graban has introduced the case for Process Behavior Charts -- including why they are a better alternative to "bowling charts" and how they help us not react to every uptick or downturn in a metric. Viewers wanted more information - and here we'll deliver!

In this webinar, you will:

What is a Process Behavior Chart? 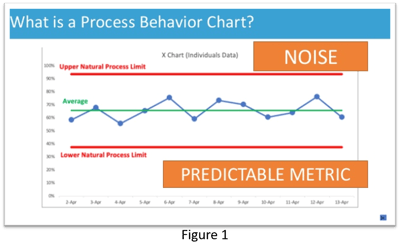 The example chart shows data that is just fluctuating around an average. We could say that all of these data points represent noise. This means that there is a consistent process that is generating predictable results. One might not like the level of performance, but the good news is that it is likely to remain predictable. Future performance is going to fall somewhere between the upper and lower limits. Because we only have noise, we don’t need to figure out why one data point is lower or higher than the next. If we don’t like the level of performance, we need to focus on figuring out how to improve the system.

How do We Find Signals?

A signal is a data point or group of data points that are not likely to be just randomly occurring, indicating that something has changed in the system. (Figure 2.) One signal is any data point that is outside the upper and lower limits. (Rule 1.) When this occurs, it is appropriate to ask why and figure out what happened. The second type of signal occurs when you have eight consecutive data points that are above or below the baseline average. (Rule 2.) That’s also unlikely to be randomly happening. It’s a signal that something has changed in the system and hopefully, we know what that is. The third type of signal is a cluster of either three consecutive or three out of four data points that are closer to the control limits than they are to the average. (Rule 3.)

Once we have the chart plotted and have identified signals, we can ask, “Did something really change significantly?” in the system or not. As an example, we can look at registrations for our webinar. The registration statistics look like this:

All of these statements are true, but they don’t give us a lot of insight into the performance of our system. There’s nothing in those numbers to help us determine if these results indicate a signal, or whether it’s just noise. What can do that is a process behavior chart.

If we plot out webinar registrations going back to 2014 (Figure 3), you can see that most registrations hovered around the average, but we did have one that exceeded the upper control limit. It was a webinar by Jess Orr on how to use A3 thinking in everyday life. It had over 700 registrations. That webinar was a signal because we had a data point above the upper limit. It was not randomly occurring, so that means that we need to ask what changed. 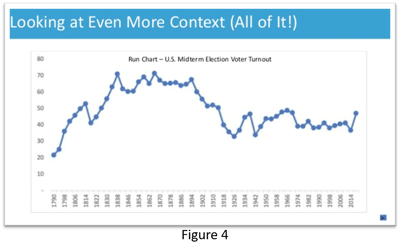 Another good illustration for separating signal from noise is the 2018 midterm elections. We saw headlines that read, “Voter Turnout Soared for the Midterms.” Another read, “Americans Turned Out to Vote in a Level Not Seen in a Century.” And still another said, “The 2018 Midterms had the Highest Turnout Sense Before WW I.” What we know from looking at other data sets is that a number being the highest in years doesn’t indicate that it is statistically out of line with the expected results of the process. It could very well be noise.

So to give it some context, we created a run chart going back all the way to 1790. (Figure 4.) Was 2018 really record setting? Maybe for the last 50 years, but the chart tells a different story. This reminds us that it is not necessarily useful to have charts that only show this year’s data or last year’s data in the workplace. We want to be careful that we are not showing such a limited time frame that it changes the conclusions that one might draw. 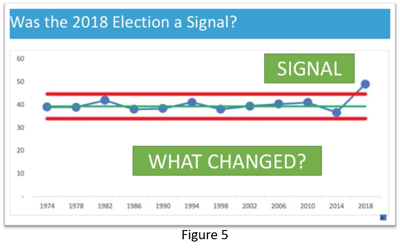 We also created a process behavior chart going back to 1974 (Figure 5) when turnout seemed to fluctuate around an average of 40%. If we were using this stable process chart to predict turnout in 2018, we would have predicted it would be somewhere between 34% and 45%. It turned out to be almost 50%, which does represent a signal because it falls above the old upper limit. Something changed in the system. It’s up to our understanding of the system to understand what changed and why.

There are many other examples of headlines that make it sound like something significant has happened, only to turn out to be noise in a system that is fluctuating around an average. Examples include emergency room wait times in Canada, automobile accident fatalities in the US, and pedestrian fatalities.

When discussing the decline in fatal accidents between 2016 and 2017, the NHTSA said they were encouraged by the fall, but commented that, “There is no single reason for the overall decline.” This is a wise statement, given that the decline in deaths is an indicator of noise in the system, rather than a signal, which likely would have an identifiable cause.

In life and in the workplace, we sometimes implement changes to try to improve the system. One example is Washington D.C. where they are debating eliminating right turns on red lights at some intersections to reduce accidents and save lives under the theory that the practice is dangerous for pedestrians. Experts disagree whether the move would increase safety or increase risk.

Should they implement this countermeasure, and then see a drop in pedestrian fatalities that goes below the lower control limit, could the conclusion be made that the ban on right turns on red caused the change? Not really. One data point is a signal, but it could just be a blip, or there could have been other factors that caused the change. To determine that a countermeasure has been effective, you need to see a sustained shift in the data.

A Note About Chunky Data

If you are trying to chart rare events, such as central line infections in a hospital, which don’t happen very often and hover around an average of one, your process behavior chart may make everything look like noise, when it really isn’t. An alternative is to chart the days between events. When you see spikes in the number of days between events that exceed the process control limits, you might find signals that indicate it is necessary to find out what caused the change to the system.

Using process behavior charts can help you react less by seeing through the noise and only worrying about data that indicates a valid signal. It can help you lead better by gaining a better understanding of causing and effect relationships. When you react less and lead better, you can ultimately improve more which is really the goal.