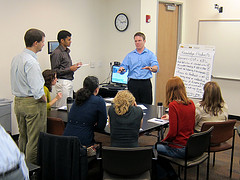 As part of our efforts to share valuable Lean practices with our readers, we've created a series of education videos. Each video covers an improvement principle in 2-3 minutes, providing you with a quick nugget of best practice information. Don't forget to share with your staff and colleagues!

There’s an old expression that gets used a lot in quality improvement efforts - "Don’t let perfect be the enemy of good." People in almost every industry often put pressure on themselves to keep thinking about the solution until they come up with something that solves the problem one hundred percent with absolute certainty. But solutions like that usually don’t exist. Don’t get paralyzed; it’s ok to implement an idea that moves us in the right direction. Some improvement is better than none.

We often have to implement multiple improvements, building on our ideas to get closer to a perfect overall solution. In one example, a hospital was trying to improve privacy for nursing mothers in a NICU. Instead of finding one silver bullet solution, they had many small ideas that pushed them in the right direction. After making sure curtains got closed more consistently and putting up signs, the curtains still had some gaps that would open up as people walked by. So they implemented another idea - they got some simple binder clips to help keep the curtains closed, and then they improved the way the clips were stored. All of these different improvements added up to a nearly perfect overall solution.

Many people don’t realize it, but Apple is a long time practitioner of many continuous improvement programs. They’re known for their modern and stylish packaging, but they didn’t create awesome packaging all at once. They’ve made, and continue to  make, hundred of small, incremental improvements to their materials and processes, which has resulted in some of the world's most innovative packaging.

As we improve processes, we certainly want to understand the root cause of the problem and to think through our proposed solutions before we test them. We think of continuous improvement as a test because we’re usually not one hundred percent sure that things will work as expected. We don't want to just rush into improvement without having a well thought out hypothesis to test, but we also don’t the other extreme of being so careful that we never implement anything. We should keep in mind that improvement work is a never ending journey, and sometimes we have to just start moving in the right direction.