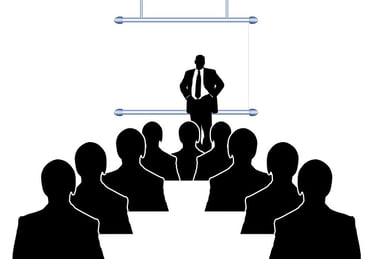 Our VP of Sales sent me an email this morning regarding a Stanford Business article he found by Luke Stangel entitled “Three Problems with Top-Down Teams (and How to Fix Them).” The body of his email was simply “Thought this was interesting, given what we do.”

Jeff, I couldn't agree more, so I’m going to share this on our blog. Hopefully, this will give all of you lovely readers something to think about while our team is hanging out with our customers at the second annual KaiNexus User Conference today!

The article references a Stanford Medicine X lecture given by Stanford Graduate School of Business organizational behavior professor Lindred Greer. In it, she describes a scene in which a doctor is talking while a nurse and patient nod along quietly. The article goes on to say that in this type of top-down dynamic, the “leader” does upwards of 80% of the talking, while everyone else contributes about 20%. The outcome of this dynamic is poor decision-making because the doctor’s knowledge is limited and the other participants are either unwilling or unable to contribute.

The solution posed by Stangel is to “create a climate where it’s OK to make mistakes, it’s OK to say something that isn’t so smart, and it’s really OK to have a crazy idea. Instead of dismissing ideas that challenge the working hypothesis, the leader should acknowledge the idea and attempt to incorporate it into the discussion.”

Ok, that sounds like something we can probably all agree on, right? The challenging part is how to actually create a culture in which this becomes the norm. They key here is in changing leadership behaviors. Some of these changes include:

Make it easy for people to come forward with their ideas by directly asking for them every chance you get. These conversations should happen in your Daily Huddles, when someone comes to you with a problem, and when you have a problem that needs to be solved. Once you make it clear that you WANT to hear ideas, your staff will be much more forthcoming with theirs.

One of our best customers has a saying that goes, “At our organization, you have two jobs. To do your work, and to improve your work.” At their organization, it’s a given for every employee that they will participate in improvement. Lay out that expectation from the get-go by including it in your new hire orientation, including it in your employee evaluation process, and following up with people who are disengaged.

You’ve seen the old trope of the suggestion box collecting dust on the wall, or emptying out the back end into a trash can. If that’s how you treat the ideas people bring to you, they’re going to know that you don’t care about their contributions.

Instead, try to see your role as a leader as enabling employees to implement as many of their own ideas as possible. When someone comes to you with an improvement, give them the support they need to make the change. Shifting your role in this way is an important step in changing your culture to engage more people in improvement.

The second problem posed in this article is that the leader holds a disproportionate amount of power in the final decisions. Often, the leader is no more qualified than their subordinates to be making the final call, even though they’re the one with the final say in what ultimately happens.

“When you’re in a meeting and everybody’s speaking up, it’s critical to make sure you’re listening to the right person… That may not always be the… person with the most seniority. It’s the person who knows most about this particular situation. That’s the challenge of teamwork: [leadership] going to change moment to moment, based on the discussion.”

The solution, of course, is to establish who has the most experience in a given area, and then let that person lead the conversation to pull from the collective experience of the team.

In an improvement culture, you see this top-down dynamic shift into a more level one when you have a variety of different improvements each led by the person best equipped to evaluate and implement them. The leaders of these teams work with their colleagues to solve problems with a diverse range of knowledge and experiences.

Giving your staff the authority to lead their own improvement initiatives lets you focus your efforts on supporting them, rather than trying to micromanage every improvement, resulting in an overall increased rate and quality of improvement.

Continuous improvement software makes coordinating staff-led teams possible by giving you insight into the progress of each improvement, reports that keep you apprised of engagement, activity and impact, and smart notifications that keep you in the loop without inundating you with too much information. With the right tool, it’s possible for you to hone in on where your help is needed most - and empower your team to improve on their own every day.

The third problem with top-down teams examined in this article is a lack of healthy debate and conflict. “Having a culture of healthy disagreement is useful,” Greer says. “That means people having a voice, having leaders step down and being able to trust and respect everybody on the team enough that it’s OK to disagree.”

This is especially critical in an improvement team. When you have a culture that supports employees coming forward with ANY idea for improvement, you’re certainly not going to agree with all of them. This article suggests that, when you disagree with someone, keep asking “why” until you understand their perspective, and they yours.

Regardless of the reason why you don’t agree with proposed improvement, the answer is ALWAYS to talk to the person, asking "why" to dig to the root of the concern and keeping at it until an improvement has been made. Ignoring the idea or brushing it off as a “bad idea” will decrease engagement and damage your improvement culture.

I highly recommend that you go read the original article; there's a ton of great research cited in it and some advice on a “hippo leadership” strategy that made me laugh out loud on a plane. Seriously folks, check it out. You don’t want to miss it.

For more ideas on how to better lead your improvement culture, download this free eBook from yours truly: