Need to Convert an Improvement into a Project? See How it Works.

You might have seen this blog post that explained why we devote ridiculous amounts of manpower to talking with our customers. Lots of great ideas come out of those talks. In fact, 87% of the improvements in our last couple of releases came directly from our customers’ ideas!

One such idea was to add the ability to convert Improvements and Projects to different idea types so that, if the idea was created as the wrong type, you could easily convert it to another type without having to manually recreate your work. In June, we were excited to add this feature to KaiNexus! 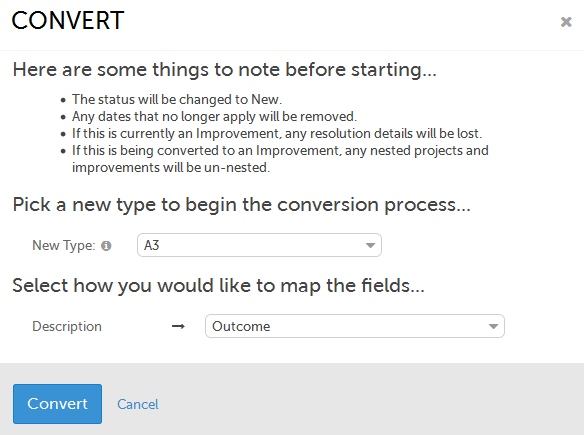 When would I want to convert a Project or Improvement?

There are lots of scenarios that might make you want to convert them. For example, if you or someone on your team:

What happens when I convert a Project or Improvement?

Before you convert, you want to be sure you're aware of what's going to change (and what isn't). Since the two have different designations and terms associated with them, there will be a little field mapping going on.

So what stays the same?

Most things. Your title, comments, files, links, Tasks, and charts will remain exactly as they were. If you have an Attribute (such as Priority or Strategic Initiative) on both the original and the new type, it will be carried over as well. Otherwise, it will be discarded.

Make sure you're aware that the status of your project or improvement will become "New" once you convert it. That means that it will no longer be assigned or considered “in-progress.” If you’re converting an Improvement, that means that any Resolution details will be lost.

If you’re converting a Project to an Improvement:

If you’re converting an Improvement to a Project:

Give it a try and let us know what you think!