This year at our KaiNexicon User Conference, Cliona Archambeault, Senior Director of Process Improvement at UMass Memorial Health, joined us on stage as a presenter. Cliona shared the background of previous Idea Systems, how they transformed their physical Idea System into KaiNexus, and how they reached 100,000 ideas in their system.

Watch the video of Cliona’s presentation for more, or read the recap below:

UMass Memorial Health has hospitals and physician clinics throughout Central Massachusetts, with over 16,000 caregivers and 1,100 physicians. When Dr. Eric Dickson, also a practicing emergency room physician, became the CEO in 2013, he noted that with their True North goal, being to ‘be the best place to get care and give care,’ they needed everybody, every day to identify problems and think about how to solve those problems. They needed to create an ‘army’ of problem solvers! Shortly afterward, they launched their first idea system.

The UMMH idea system started in 2013 as a paper and white-board-based solution. The board included sections for new, active, parking lot, needs help, and completed ideas. The idea card included the problem, why, and idea, and later iterations also included the strategic alignment to true north. A few teams experimented with digital solutions using SharePoint and other technology. Throughout, the CI team continually focused on coaching and managing the system. The number of ideas implemented each year was counted, and new caregivers learned about the idea system in White Belt during New Caregiver Welcome.

When the Pandemic hit in March 2020, they needed a new way to gather ideas and support their CI work while many teams transitioned to working from home. This is when Dr. Dickson asked the CI team to reimagine how the Idea System could work. Soon, UMMH began its partnership with KaiNexus. Before configuration, they assembled an Idea System Advisory Group to gather insight into how they would successfully build this electronic idea system. They learned three key insights from this team that they kept in mind during configuration: keep it simple, keep it familiar, and allow teams to customize. 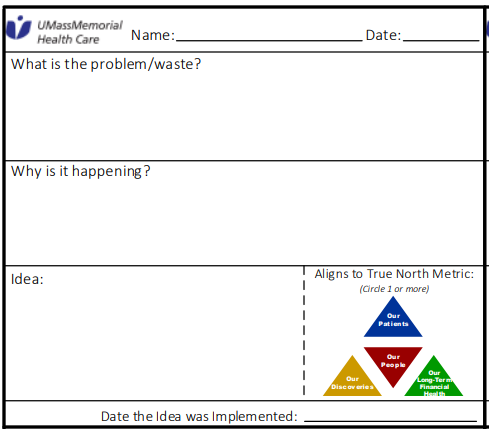 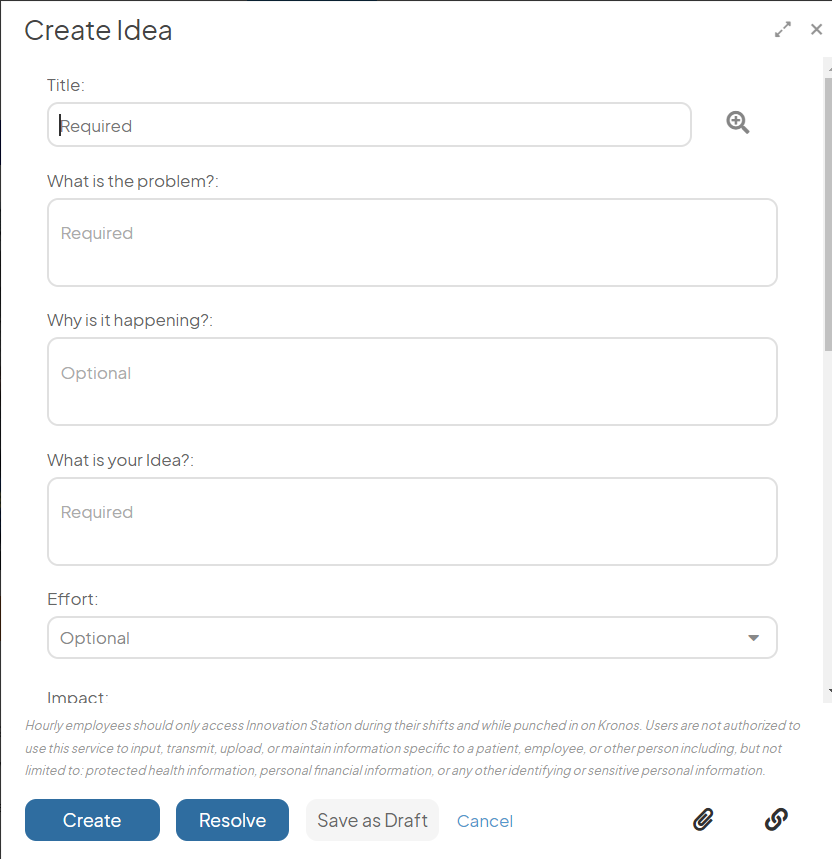 Once KaiNexus was configured, which they refer to internally as Innovation Station, it was time to roll it out it to the organization - all 16,000 caregivers. So over the next 6 months, they launched phased roll-outs until each and every caregiver was in the system. With the help of their CI coaches, internal marketing team, and KaiNexus Training and Support, the UMMH team was able to roll out KaiNexus successfully.

With a group as large as 16,000, there are many important things to focus on - not only just to introduce the platform but building adoption as well. These things included:

Involving Leadership In order to foster the engagement of Leadership, the UMMH Team measures and reports on the participation of each team based on the data from KaiNexus and shares it with Leadership. These monthly scorecards provide status reports on the True North goal.

Additionally, Leaders are encouraged to ‘Like, Follow, and Comment’ on items in the system to encourage caregivers to continue interacting with KaiNexus and to ensure Leaders are familiar with ideas coming into the system. They use frequent communication such as email campaigns and including KaiNexus agenda items at leadership meetings to nudge these behaviors.

When they reached 100,000 ideas in their system in January 2022, CEO Dr. Dickson filmed a congratulatory video for the team who submitted the 100,000th idea. (Please read this article if you want to learn more about UMMH reaching 100k Ideas!). This kind of involvement from top executives and leadership is extremely important for driving participation.

Strong Coaching Support While rolling out the platform, they designated fifteen coaches to support different areas around the organization. But beyond just having a designated resource, they host Idea Generation coaching sessions that teams can sign up for online, which has been an extremely successful way of engaging people in the platform.

Jami Yi, one of the CI Coaches, leads these 60-minute sessions and helps the teams generate & input their ideas and follows up on them. For example, the Family Practice division of their organization participated in a 60-minute brainstorming session and came up with 36 ideas!

Encouragement from within KaiNexus It was important for the UMMH team to make the platform as accessible as possible. For example, they moved their Grant program workflow that provides funds for Improvement work into KaiNexus. This is meant for teams who come up with an idea but need some funding to make their vision into reality. Before KaiNexus, this process was done from a SharePoint site, and if you didn’t know where to go, it was confusing. Putting this Grant Program into KaiNexus cleared up much confusion. (They are on track to exceed their allotment for funds this year, which they have never done before!)

Along with other grant programs they have set up within KaiNexus; additionally, they have integrated the following into KaiNexus:

Having these workflows in KaiNexus gives people the incentive to go into the platform more.

They also utilize the Honor Roll feature to engage caregivers through recognition of outstanding ideas. Each month, CI coaches have the opportunity to recognize impactful ideas from caregivers all over the organization by awarding them ‘Honor Roll’ status. They then highlight those Honor Roll Ideas in a news article posted on their Intranet. This Honor Roll recognition is an extremely important part of their adoption strategy.

With 16,000 caregivers, configuring a system to meet each and every one of their needs was a daunting task. But by establishing a clear vision, that being ‘KaiNexus is where UMMH gets improvement work done,’ they are able to take a step back and evaluate what is best before making any decisions.

What helps them stay close to this vision is by having clear priorities they ask themselves before  changing something in the system:

UMass Memorial Health Team has worked hard to make KaiNexus a place where not only improvement work gets done, but a place to inspire their caregivers to take the power into their own hands to improve their jobs, patient care, and their organization.