We’ve probably all gone to conferences that have the same, relatively stale format. Most often, a series of speakers gets up on stage for hour-long blocks of time. Even if the speaker is engaging and effective, it’s essentially one-way communication that leads to passive listeners. Some of the lean back listening time gets interrupted with a few audience questions.

This dynamic usually means a missed opportunity when you’ve created and gathered a community of people who are all working on the same things. Conference goers have a lot to share and learn from each other in more interactive ways.

That’s why something called “Open Space Technology” (OST), or more commonly just Open Space, is a great way to shake up a conference or replace the traditional conference all together.

Wikipedia defines OST as a:

“way for hosting meetings, conferences, corporate-style retreats, symposiums, and community summit events, focused on a specific and important purpose or task — but beginning without any formal agenda, beyond the overall purpose or theme.”

I attended an event in Seattle about two years ago called “Kaizen Camp.” The organizers did a great job of attracting people who are involved with various Lean and continuous improvement disciplines, coming from as wide of a range of industries as you could imagine. The only promise was a room full of people who wanted to talk about the same broad topic.

That might seem a bit scary. What, no keynote speakers? No breakout sessions to choose from? It worked amazingly well at Kaizen Camp and I became a big advocate for this approach. Even if you don’t run an entire “un-conference” in the OST style, you can use an hour or two of a traditional conference to do an “Open Space” session. The Lean Enterprise Institute, for one, has done OST sessions at some recent events.

Open Space is very much a self-organizing event, once you get everybody in the room (scary, right?). The session starts with a everybody sitting or standing in a huge circle. I think the Seattle event had about 200 people. People introduce themselves and any topic they want to discuss during the event.

From these proposed sessions, a “master schedule” gets posted on the wall based on topics participants have voted on. Participants can see the schedule and decide what topics they want to go be a part of.

This video shows a good overview of what this looks like:

And this more detailed explanation:

Then, you “vote with your feet” and walk to whichever session you want to be a part of. One of the few guiding rules of Open Space is that you can vote with your feet at any time and leave a session that you’re no longer interested in (it’s not considered rude to do so).

The “law of two feet” says:

“If at any time during our time together you find yourself in any situation where you are neither learning nor contributing, use your two feet, go someplace else.”

When you are at a session, the facilitator might again introduce the topic and ask people to introduce themselves. Everybody is then invited to write a topic or a question on a board (or a post it) to form the more detailed topics to be discussed (as shown in the photo here, from a session I facilitated). 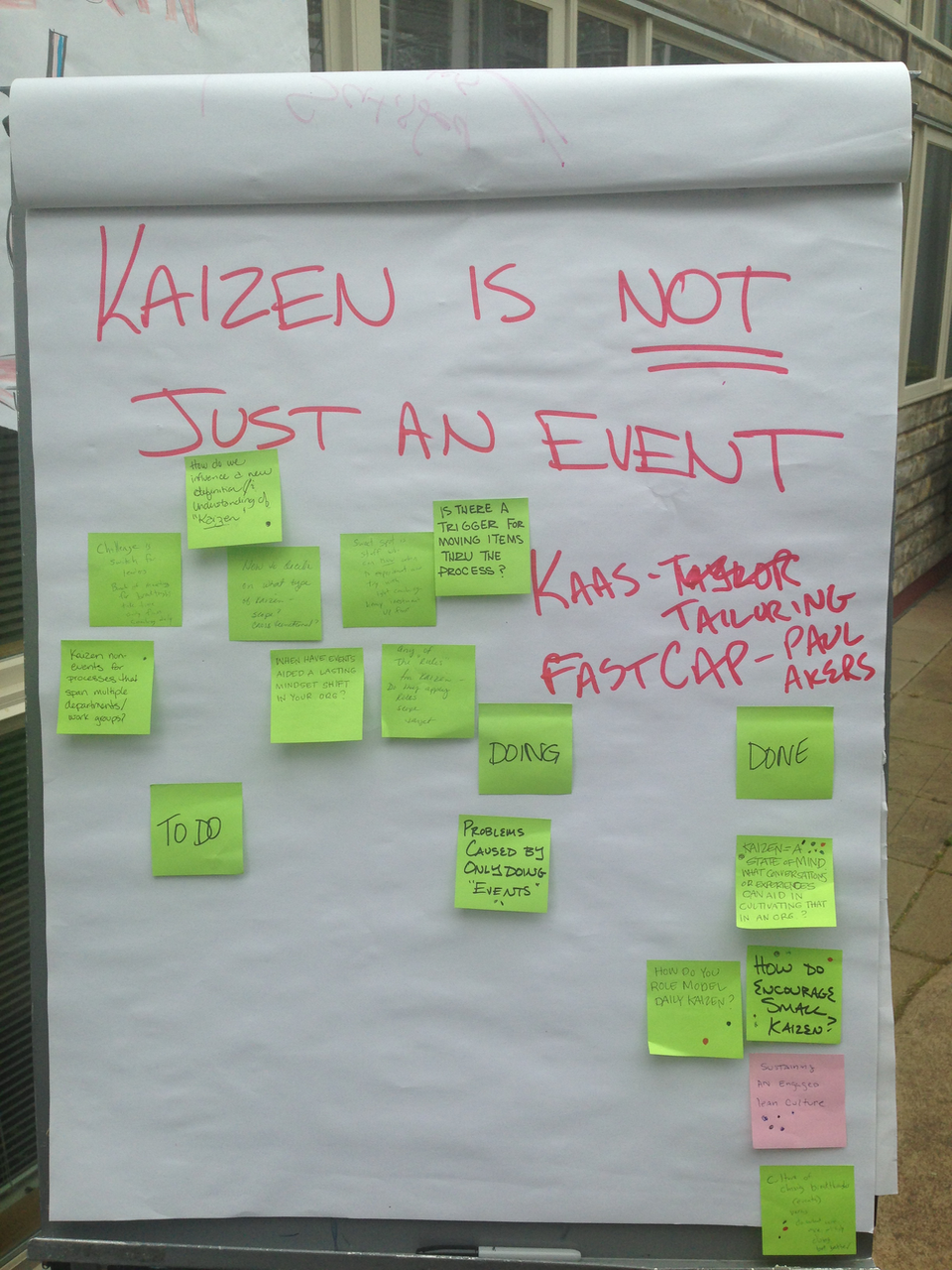 Even without detailed rules and guidelines, this process works well. The details of each discussion are managed along the lines of the “Lean Coffee” discussion format that I’ve also used to run a single discussion (or gatherings I have hosted in San Antonio to discuss Lean).

Lean Coffee follows a similar process where topics are proposed by participants, get voted on, and then discussed for some period of time before the group decides to move to the next topic.

The Rules of Open Space:

At the end of the event, the circle of participants reconvenes for people to share their reflections on the event.

That’s it. If you give people the freedom and opportunity to structure and have their own discussions, great things tend to happen… if you’re willing to take that risk.

We’re willing to take that risk at our upcoming KaiNexus User Conference, being held October 29 (with an optional workshop I’m facilitating on “Kaizen Coaching” on October 28). We’re going to do an hour of Open Space / Lean Coffee open discussion with our attendees. Wait, “attendee” isn’t the right word… that sounds too passive. “Participant” is indeed a better word to use.

Have you ever been a part of an Open Space or Lean Coffee discussion? What did you like about it? What are your lessons learned?