How to Avoid 4 Common Catchball Errors

Of the four most popular professional sports in America, baseball is unique in many ways. In the others (basketball, football and hockey), possession can change at any time. The defense becomes the offense or vice versa. The role of each player is fluid and can change at any moment. Not so in baseball. Possession only changes when three strikes are achieved and it is a distinct and obvious event (and sometimes an opportunity to grab a beer). Every player has a very specific responsibility each time the ball is put into motion. In fact, these responsibilities are so well defined, that it is possible to track each player’s failure rate, in the form of errors.

The Lean practice of Catchball has a lot in common with the game of baseball. The “ball” is an idea, which is passed from one player to another for action. Players must be proficient in both catching and throwing and they must always know where the ball should go next. And, like in baseball, mistakes can be made that hurt the team. Here’s a look at some of the most common Catchball errors, not for the purpose of tracking them, but for the purpose of avoiding them.

The “game” of Catchball begins when one person, usually a manager, passes an idea to someone else for consideration, action and improvement. In order for the game to get off to a good start, however, the pass must be made with enough information, background and context for the next player to be successful. Just tossing vague thoughts into the air isn’t sufficient.

In baseball, a passed ball occurs when the pitch is good, but the catcher simply misses it. In Catchball, this happens when the passed idea results in little or no action. This can be the result of poor employee engagement, but more often it happens because there is no method of tracking who has which ball.

3 – Trying to Throw Before the Catch

A common error in baseball occurs when the fielder reaches into his glove to try to make the double play before the ball has actually been secured. It’s embarrassing. In business, this happens when someone tries to pass along an idea or improvement that they haven’t really taken the time to consider fully. Catchball is not a game of hot potato. Everyone should have the time to give the idea due consideration.

More on making time for continuous improvement in this free webinar: 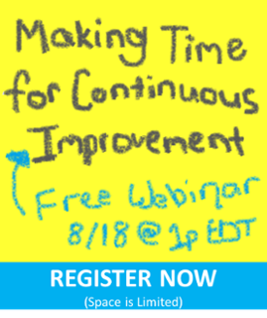 4 – Forgetting Where the Ball Should Go Next

Professional baseball players are very good at understanding the game situation and knowing if the ball should go to a cutoff man, a base or back to the pitcher. Once in a while a player makes a mistake and sends the ball to the wrong place, potentially costing the team a double play opportunity or a run. Teams playing Catchball can likewise error if they don’t clearly understand who should get the ball next or if they send it back to the manager before everyone on the team has the chance to hold the ball.

Although the concept of moving ideas from one person to another sounds simple, Lean Catchball requires focus, discipline and attention to detail. Like baseball, much of the success of the game is determined before the first pitch is thrown. The right lineup, effective training and a well communicated game plan are the keys to a Catchball home run.