Allen Iverson was a legendary NBA point guard and scorer who played from 1996 to 2011.

In a 2002 news conference that still appears regularly on ESPN, Iverson responded to criticism that he missed practice (due to injury) and he somewhat indignantly asked (over and over) some variation of:

Iverson wasn't complaining about having to practice, but more about the media's insistence on asking questions about practice, which is a topic he apparently didn't think was too interesting to talk about.

Listen to Mark read the post as part of our Podcast series:


Practice is certainly important. Maybe not when you're already as good as Iverson was.

But for most of us, we're still getting better through practice. We make mistakes and, hopefully, learn from them. Yes, we can learn through our own reflection, but I think we learn more when we're coached or mentored by somebody who's more experienced than we are. This is true for basketball, and this is true for Lean.

I've been studying and working with Lean for 20 years now, since I graduated from college. As it turns out, my career has two equal halves, with the first 10 years focused on manufacturing and then 10 years exclusively in healthcare.

Hitting that milestone, I've been reflecting a lot about my own work, my teaching of others, and my writing.

I've been thinking about how, if we look back, for most of us our first year of Lean or continuous improvement was probably the time when we had the lowest level of understanding of Lean. We've all made mistakes in the early days with Lean, due to things we misunderstood or things we did clumsily.

Greg Jacobson and I did a webinar about that about a year ago, titled "Getting Started with Continuous Improvement: Lessons and Reflections." 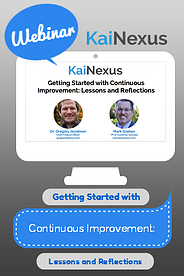 Along those lines, I've been working on a collaborative eBook project that I call Practicing Lean: Learning How to Learn How to get Better, Better. I've written a few chapters with my own reflections. I've also invited people I know to contribute a chapter with their own first person account of early mistakes and lessons learned. The eBook will be updated over time and those who buy it will get updates over time. Those who buy it early get a better price. But, proceeds will all go to our friends at the Louise H. Batz Patient Safety Foundation.

You can read the entire introduction and first chapter online here (or download it through the book's page).

Here is an excerpt: 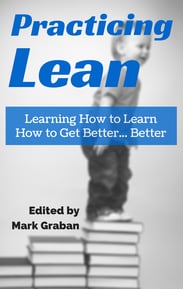 Lean concepts might seem simple, but Lean is not an easy craft. Being an effective Lean leader, facilitator, or practitioner requires more than books and classes – it requires people skills, judgment, and wisdom, things that can often only be developed over time.

It’s probably not realistic to expect people or organizations to be really good at Lean right away. It requires practice. Does a child (or an adult) sound good the first day they are playing a new instrument? Probably not!

I think that word – practice – is important. Attorneys get to “practice law.” Physicians are allowed to “practice medicine.” Think about that if you’re a lawyer’s first case or a surgeon’s first procedure. Try not to think of the sound of an awful, screechy violin being played by a new student.

There are many imperfect words that get used to describe a person or an organization that are utilizing Lean methods and mindsets:

One of my earlier healthcare clients pretty much banned everybody from using the word “implementation” and I now see their point. That word bothers me more now than it did then. I’m progressing. I’m getting better… I hope.

If we keep practicing Lean, someday we’ll get good at it. Or at least, each day we’ll hopefully be better than the day before.

In my own early days of learning and practicing Lean, I had a lot of misunderstanding and I made a lot of mistakes.

During those various attempts, I had the best of intentions. I was trying to improve quality and safety, creating a better workplace, and aiming for long-term success for the companies I worked for. I was trying my best, but I sometimes failed others in the process.

Do you have reflections to share about mistakes or misunderstandings you had in the early days of your Lean journey? If so, please leave a comment below, or contact me if you'd like to submit a chapter for consideration.

As I say on the book page, "If we keep practicing, we might get good [at Lean] eventually."