A Pilot and a Focus on Engagement: Continuous Improvement at Mohawk

One of the most interesting things about working with new clients at KaiNexus is that we get to hear stories about how organizations have approached continuous improvement (CI) and ask them about their challenges, successes, and plans for the future. Recently, our Vice-President of Improvement & Innovation Services and founder of LeanBlog.org, Mark Graban had the opportunity to speak with Ben Whitaker, Director, Business Process Management and IT for Mohawk Fine Papers about the beginnings of his organization’s CI journey.

Mohawk is North America's largest privately owned manufacturer of fine papers, envelopes, and specialty substrates for commercial and digital printing. The company has a long history providing paper products, and products like paper, for their customers to print on. Whitaker explained that some of the equipment the company has is over a hundred years old, and according to Mohawk’s website, the company was founded in 1931.

Listen to the interview and subscribe to the podcast:

As Whitaker explained, the motivation to consider improvement methodologies came about in 2016 because of a recent expansion into the envelope business in addition to the company’s paper operations. This expansion was originally a response to industry changes that urged the company to get control over envelopes that were made from its paper.

“One thing led to another, and the envelopes business continued to get traction, grow, and develop. It grew very, very fast for us,” Whitaker explained. “Our president felt that that part of the business was not really in full control, so he engaged with a consulting firm, USC Consulting Group. We brought them in specifically to help us address some our processes in envelope manufacturing, so it was a very focused effort.”

This approach came with several benefits over and above the productivity improvement, including proof that the methodology was worth the effort.

“That was sort of the beauty of that as a pilot project; we went in with a consulting contract, which had certain dollars that we wanted to make sure we got benefits against and so we were measuring it really with hard productivity dollars,” Whitaker explained. “And we ended up realizing most of that, so everybody felt very good about that project, and we could borrow their methodology; maybe the benefits won’t be quite as measurable in other places, but we’ve proven that you can get measurements. Specifically, we’re going after productivity, we feel comfortable that directly related to the continuous improvement activities around our envelopes we achieved something around the order of a 25% increase in productivity, which was fantastic. And so, we do have a nice pilot project, with a nice ROI that’s measurable.”

The envelopes pilot project went on through 2016, with the engagement of the consulting firm wrapping up at about the same time as new leadership in Whitaker’s department, which is responsible for improvement efforts, was appointed. This convergence of events led to the company viewing the project not just as a one-off set of improvements, but as a part of larger CI initiative that should be spread across the organization.

For Mohawk, the next step in their CI process involved what they refer to as their “business processes.” As Whitaker explained, the company had previously done work based on Dr. Michael Hammer’s Process and Enterprise Maturity Model (PEMM), wherein an enterprise process model was built for them.

Whitaker explained this model as essentially just envisioning how the larger enterprise works in three, or four, or five core business process. During this work, Mohawk settled on three business processes that they were comfortable with.

“Now, we’re not quite company-wide, but we’re company-wide with various pilots,” Whitaker said. “We really wanted to make sure that we were developing an employee-focused culture around improvement. The executive team was driving the culture change, but the actual content of what we were doing we want from the employees in conjunction with the managers. So, it was trying to find a combination of employees and managers to really get them engaged first, obviously, you can’t include everyone, so we had to pick a subset, and then use them as the voice, to start to engage the business processes."

To get started, Whitaker’s team brought together several people from all the business processes for a two-day, off-site meeting to focus on CI. During the meeting staff held a series of breakouts and other sessions around how to engage employees in the concept of CI, get employees to give ideas, and think about what they could be doing better in their jobs.

Whitaker said this challenging concept was approached using a question brought to them by USC Consulting Group, “Did you have a good day?” Those in the meeting discussed how to ask that question to all employees.

Once back from the two-day meeting, the teams started with creating their own pilot projects. Whitaker explained each of the business processes have their own structure to manage CI efforts, and then they come together to share learnings about how each one is doing what they’re doing. Often, the opportunities for improvement cross processes, meaning they effect a lot of different people.

While the CI efforts in each of Mohawk’s business processes can implement a flexible approach, Whitaker’s department provides consistent tools to ground them all together. One of those tools is, of course, CI software. 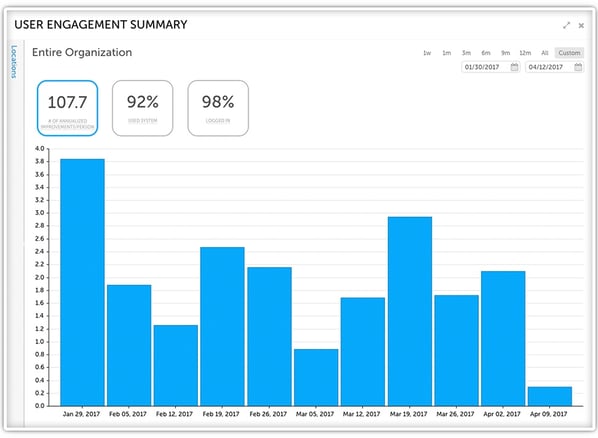 “When we got involved in the envelopes project, we didn’t have KaiNexus. We found a Microsoft Access template somewhere on the internet and we built it out a little bit, and were using that to track our opportunities for improvement—capturing them, tracking them, and getting them closed out,” Whitaker explained.

“We knew we couldn’t build something, we had a tool we couldn’t scale, and so in a bit of a panic we were [hoping to find] somebody out there who can help us. And we were really grateful to find KaiNexus.”

Part of the draw of a CI software like KaiNexus was that it supports employee engagement, not just statistics and data generation. During this stage of CI implementation, Mohawk is heavily focused on engaging employees first, rather than measuring the return of investment (ROI) of that engagement.

“We decided consciously that focusing on quantifying those benefits would distract us from the more important pieces right now in our evolution of employee engagement and proving to employees that we can listen to them, we can capture their ideas, we can either provide feedback, or provide closure,” Whitaker said. “Right now it’s enough to track engagement, how many employees have we talked to, what opportunities do we have, and how are we doing at closing them out.”

Whitaker stressed that Mohawk is taking its time, developing strong engagement first, and wrapped up his conversation with Graban by reminding those listening that patience is important, and not to overcomplicate the process.

“Give yourself time and to just stay focused on where you are in your journey and just focus on those things. It’s very easy to get distracted by ROI. And if you believe in this kind of approach... just be patient and allow yourself to grow into it.”