Did Microsoft Hack Employee Productivity with a 4 Day Work Week? 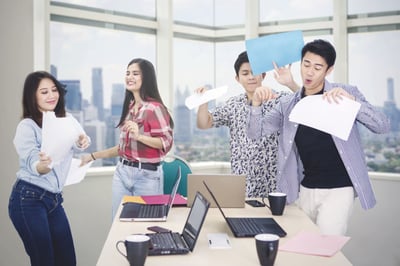 By now, you’ve probably heard of Microsoft’s experiment with a four day work week in Japan. The trial program, which saw offices closed every Friday during August, was part of Microsoft’s “Work-Life Choice Challenge,” a summer project set up to look at work-life balance and help find ways to boost creativity and productivity.

The results were pretty amazing. Productivity increased by 39.9% versus the same period in 2018. Not only was productivity improved, but also the number of printed pages in the office dropped by 59%, and electricity consumption was down 23%.

In the spring of 2018, Perpetual Guardian, a trust management company in New Zealand, started a program that paid people their regular salary for working four days. The company saw a 20% gain in employee productivity. It worked so well, in October, they made the policy permanent.

Earlier this year, Shake Shack began trying out a shortened schedule at its Las Vegas restaurants to attract and retain employees. CEO Randy Garutti shared in an earnings call that, “We’ll be expanding our test of a four-day workweek for managers, and ramping up even more towards our diversity and inclusion goals.”

Some organizations like KPMG and Deloitte are offering four-day workweeks with flexible hours, but employees are still expected to put in the full 40 hours over those days. Others, like Microsoft, reduced the hours worked by 20% to free up the extra day.

Not all four-day workweek experiments are successful. The state of Utah abandoned their 4-day plan after citizens and businesses complained about state offices not being open on Fridays.

Changes to Standards Made it Possible

How were Microsoft employees able to be more productive in less time? Of course, employees were delighted with the program, and a simple increase in satisfaction certainly contributed to the program’s success. But, the company also made some smart changes to make it possible.

First, they changed the standard time for meetings from 60 to 30 minutes. This was after feedback from employees who said that most meetings did not require an hour.

Next, they strongly encouraged people to limit the number of employees in each meeting to 5. One person from each group attends the meeting and shares the relevant information with the rest of the group.

Speaking of sharing information, Microsoft also encouraged people to stop using email and instead use technology designed for collaboration.

The data backs up Microsoft’s belief that too much time is wasted on unnecessary meetings and tasks. According to a global survey of nearly 3,000 employees across eight countries conducted by Kronos Incorporated, 78% of employees said they could do their job in under seven hours a day if they could work uninterrupted. Almost half said they could do it in five hours or less.

What fills up that wasted time? “Fixing a problem not caused by me,” impacted 22% of responders. Another 17% pointed to administrative work. Next came meetings (12%) and email (11%).

What Can We Learn?

Of course, not every company can move to a four-day week or even allow for flex-time, but there are some excellent lessons from Microsoft’s experiment, even if you can’t change your employee’s schedule.

Microsoft recognized a problem with work-life balance and looked for creative ways to address it. They involved employees and sought input. They made sure that they understood the problem before trying to solve it. This is good advice for any leader looking to improve working conditions for employees. What ideas might your employees have for improving work-life balance?

The company used data to find out how to support the change and to measure the results. Before the change, survey data showed that workers in Japan spent more time in meetings than those in other parts of the world. This information helped Microsoft hone in on one of the ways to make the program possible. Do you know how much time could you give employees back in their day by reducing the frequency and duration of meetings?

Finally, as you might expect at Microsoft, technology was part of the solution. Do your employees have a platform for improvement and collaboration or are they spending too much time hunting around in their inbox for important information?

The four-day approach isn’t a fix-all by any means, but I think Microsoft demonstrated some useful problem-solving techniques in their approach to this issue. It paid off for them.