Preface: I’m in northern California today. Summer doesn’t even officially begin for three days and it is 107 degrees! So, the fact that I started thinking about what quality improvement and delicious frozen treats have in common should not imply that I’ve finally lost it. 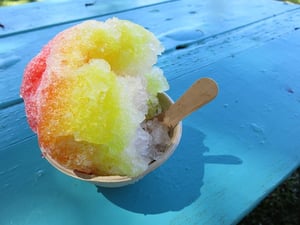 Continuous quality improvement (CQI) is one of those things that is like a snow cone. It’s something that pretty much everyone can agree is awesome. Who wouldn’t want it?  “Always getting better is overrated,” said nobody – ever. Yet for some reason, not every organization has a plan for how to achieve CQI. Fewer still, have systems and processes in place to support it, and many that try never successfully reach their goals.

Let’s see if my snow cone analogy can help explain some of what conditions are necessary for CQI to catch hold.

If Neglected, It Will Melt

We don’t have hard data to back it up, but it is quite likely that the number one killer of CQI programs is simple neglect. Leadership gets very excited about this opportunity to revolutionize the organization, cut waste, and clobber the competition. They hold a meeting, send out a message, maybe even put up some signs and then go back to business as usual. Pretty soon, everything reverts to the old way of doing things, except that maybe employees are sharing Dilbert strips about CQI, or TPS, or Lean, or whatever you’ve called the program. (Don’t doubt that there is a Dilbert strip for all of them.) If you want to see what happens to CQI programs with disengaged leadership, just leave your snow cone on the driveway for the afternoon.

The alternative is for leaders to fully commit to CQI and embrace it as, not just the program of the week, but as the basis for the organization’s culture. Executives, department heads, managers, and supervisors should run the improvement part of the business using the same tools that front-line employees have been asked to embrace. Employee accountability and recognition should include improvement efforts and success should be widely acknowledged. Enjoy your snow cone, don’t just stare at it.

The Key Ingredient is Transformation

What is a snow cone? It is 95% water, with a little flavoring thrown in. But, somehow, a glass of water with a squirt of Tiger’s Blood doesn’t seem as appealing. Freezing the water and shaving or crushing it just so, makes it something utterly new. In most organizations, employee ideas for improvement are as ubiquitous as water. They're just sort of everywhere, but not something most people think about very much. That’s the point of CQI, to transform those ideas into something new – action. Just like there is a process in making a snow cone, CQI sets forth the process of turning an idea into a successful innovation. The opportunity is captured, analyzed, implemented, measured, and shared. Ideas are systematically turned into amazing results.

You Need the Right Stuff

The reason that I am not enjoying a snow cone right now is that I don’t have access to a snow cone machine, and I presently lack the will and the extra time to go find a snow cone stand. Why doesn’t spontaneous continuous improvement happen more often in companies? It could be that employees don’t have the right tools at their disposal. Perhaps they lack the level of engagement that compels voluntary effort, or maybe they are unable, or afraid to carve out time. Companies that are committed to improvement take steps to address each one.

Tools: A continuous improvement software solution that is used across the entire organization provides structure to the improvement process, creates a common language, and gives everyone insight into the health of improvement efforts across all departments. In addition, improvement tools and techniques like value stream mapping, PDSA, the 5-whys, and Catchball, give employees the power and knowledge to act when opportunities for transformation are found.

Engagement: Ensuring that leadership does not neglect CQI is the first step to employee engagement. Recognition for improvement efforts also goes a long way toward getting people excited about the work, as does fostering a sense of empowerment and ownership of the processes and tasks that they tackle every day.

Time: When are employees supposed to work on improvement when every task is urgent and ASAP means yesterday? There has to be some give in order to practice continuous improvement. Some organizations use rapid improvement events or daily huddle meetings to carve out time for transformation.

Eating snow cones by yourself is not quite like drinking alone, but is still isn’t as fun that enjoying a tasty, cool treat with your friends. CQI isn’t only more fun when people work on projects together, but it is also more effective. In fact, the most common places where processes and value flow break down are the transition points between people, teams, and departments. That’s why CQI works best as a company-wide initiative with everyone from the front lines to the c-suite fully in the game.

Hopefully, this CQI/snow cone analogy has given you some food for thought. In short, it is a delicious thing, but it won’t materialize without some planning and effort. In other news, I believe I have just become sufficiently motivated to find that snow cone shack after all.