Idea Boards for the Modern Workforce

Call me crazy, but I think the world’s first idea board was probably painted on a cave. People have an innate ability to process visual information. So it makes sense to me that our early ancestors would have communicated their plans and suggestions with pictures on the wall. They likely had daily huddles and didn’t even know it.

Early humans evolved and eventually spent the workday in an office or factory rather than hunting food in the wilderness. Idea boards evolved too and became a poster board or whiteboard where ideas were collected (often on Post-its) and grouped in deliberate ways to quickly communicate information. The “To-Do, Doing, Done” arrangement is popular because anyone who sees it can immediately assess the amount of work in progress compared to the backlog.

Idea boards are used for serial projects, like software development that has a beginning, middle, and an end. Work moves through the board like a stream. They are also used for “messier” endeavors like brainstorming new product ideas or collecting suggestions for improvement.

In short, idea boards are pretty awesome, but evolution never ends and we’d argue that it’s time to move beyond Post-its and whiteboard markers and make the leap into the cloud by digitizing every idea board. Your modern workforce will thank you for it. Here’s why.

“You had to be there” is for inside jokes, not continuous improvement.

Today’s workforce is mobile, always-on, and collaborative. If you want people to be able to engage in improvement work and follow the progress of projects across the organization, there’s no need to require that they make a pilgrimage to the break room or wherever the idea board is mounted. With digital idea boards, your team can review and interact with the boards from wherever they happen to be on the device of their choice.

Modern workers have no patience for lag. Things that are seen to be even a moment out of date are quickly dismissed and ignored. That creates a problem for idea boards. If a person isn’t standing in front of the board when a milestone is reached, it might not get updated for who knows how long. As soon as the team stops trusting the timeliness and accuracy of the board, its value is lost. Digital boards, on the other hand, can be updated immediately when a new work stream is started or when progress is made. The information is available to everyone who needs it as it happens.

Snapshots are great, video is better

Even if your team does an amazing job of keeping the idea board relatively up to date, it still represents only a moment in time. It shows you what the situation looks like now (or probably a few days ago), but doesn’t give you any insight into how you got to where you are. Once a project is complete or an idea is rejected, it is removed from the board. That’s a shame because every bit of information collected over time should become a valuable part of the organization’s repository of knowledge. The fact that an idea isn’t going to be enacted right now, doesn’t mean it should never be remembered or revisited. Successful and unsuccessful projects offer lessons that should be captured for future analysis. Digital idea boards are more like video. You can see the progress of each improvement project over time.

If it is worth doing, back it up

Granted, if your building experienced a disaster like a flood or fire, losing the idea board is probably low on the list of concerns. But still, if it has value you will eventually need to replicate it, which may be difficult if ideas are lost. Needless to say, a digital board eliminates this risk. Business continuity in the event of a disaster or a simple power outage is a common target for continuous improvement efforts, so why not start with the tools you use to achieve it?

You can have your cake and eat it too

When we talk to folks about digital idea boards we often hear, “Hey that’s great, but I love having the idea boards hanging on the wall because it keeps it top of mind and conveys information even if people are passive about it.” We couldn’t agree more. It is easy and inexpensive to mount a flat screen monitor or TV and broadcast your idea boards right where your poster hangs now. The best continuous improvement solutions make it easy to select which boards you want to display, set the time for each to show up and create a loop that moves from one board to the next. You get the impact of break room or hallway visualization, but with all the power of an active application behind it.

When it comes to idea boards, we’ve come a long way. We can harness the power of the net to create a collaboration and improvement framework that never sleeps and knows no bounds. I think our cave people ancestors would be proud.

Learn more about virtual visual management in this free webinar: 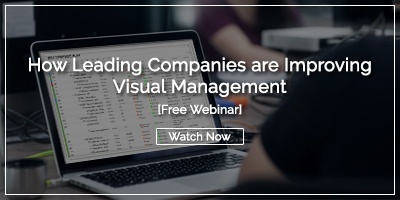