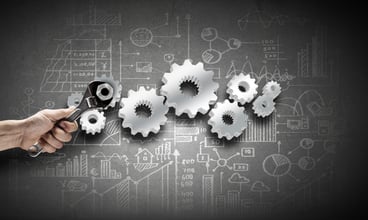 Six Sigma is a business management methodology that leverages a scientific approach to quality measurement with the aim of reducing variation and defects. The method was pioneered by Motorola and Allied Signal and then made famous by GE who boasted $10 billion in savings during the first years of implementation.

Lean is another methodology, philosophy, tool set, and management system that also uses a scientific problem solving approach, and more. "Lean" is a generic term that was given to the Toyota Production System, or TPS. The two pillars of TPS are usually described as "just in time flow" and "quality at the source."

Lean and Six Sigma are often used together by organizations in multiple industries, bringing methods and mindsets from each approach.

Many frameworks exist for implementing the methodologies. Many of those tools can be useful to organizations whether or not they fully embrace the Lean or Six Sigma approaches. Here are a few that our customers have found most valuable.

5S is a workplace organization paradigm that is meant to improve safety, reduce waste, and streamline the flow of value to the customer. The approach is named after the five principles of Sort, Straighten, Shine, Standardize and Sustain. (Not coincidentally, each of these terms is translated from a Japanese word that also starts with S when written in phonetic script.)

While we’re talking about Lean tools that involve the number five, we should mention the 5 Whys. Keep in mind that one of the essential tenets of Lean is that problems should be addressed at the root cause rather than covered up or worked around. The underlying cause of an issue can often be found by asking the simple question, “Why?” five times. The answer to each question is documented, and the process is repeated until the source of the issue is identified and resolved.

A3 reports (named after the metric paper size initially used by Toyota) are one-page reports that document everything that is necessary for decision making and reporting for a particular process. They are used to condense information from many sources into one easily digestible and actionable document. They typically include background, the current process flow, analysis, goals, recommendations, and an implementation plan.

DMAIC stands for Define, Measure, Analyze, Improve, and control. It is perhaps the most important Six Sigma tool of all. It is an improvement cycle that is used to stabilize, improve, and optimize business processes. Many refer to DMAIC as the Six Sigma roadmap for problem-solving. Once the cycle is completed, and new Standard Work is documented, it can be repeated to achieve additional improvement.

Kanban means “shop keeper’s sign” in Japanese. It is a visualization methodology that allows for just-in-time manufacturing and streamlined workflow in other industries. The idea is to use visual cues to deliver the correct inputs a process needs when it needs them. This means that stock levels of raw materials, components, work in progress and finished goods can be kept to a minimum. Today, many organizations use digital Kanban boards to visualize the movement of work in progress through a process.

It's often said that of the primary goals of Six Sigma is the elimination of variation, but Lean focuses on that goal, as well. To achieve consistent, predictable results, it is imperative that each process is performed the same way every time, regardless of who is completing the associated tasks. This is achieved through the development, documentation, and enforcement of Standard Work. The Standard represents the current best practice for performing each part of the process. The Standard Work is not set in stone, however. It represents the baseline upon which improvement measured.

Value stream mapping is a Lean tool designed to ensure that every part of a process delivers value to the customer. Value is defined as something that the customer is willing to pay for. During the value stream mapping exercise, the current process is documented. Every step, task, or resource expenditure that does not directly produce value is targeted for elimination or improvement.

These Lean and Six Sigma tools can be used independently or together to achieve quantifiable business goals. Improvement management software is often deployed to unify improvement projects using these techniques and to amplify the results. Our clients who’ve made use of these tools have reported measurable results in terms of cost savings, quality improvement, increased customer satisfaction, and employee engagement.